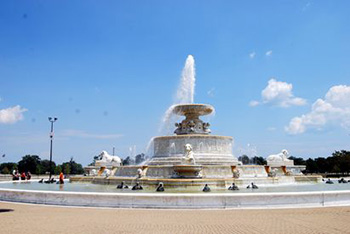 Detroit-based Parjana Distribution has installed a new high-tech system at Belle Isle that has reduced the volume of stormwater runoff at the nearly 1,000-acre park by more than 80 percent.

“The goal at a macro level is to demonstrate that we can avoid stormwater from going into the Detroit Water and Sewerage Department,” says Greg McPartlin, CEO of Parjana. “We installed our technology on the island … (which) creates capillary action (the ability of a liquid to flow in narrow spaces) and thus enables the water to infiltrate the earth naturally as Mother Nature originally intended.”

McPartlin says the company’s patented system, called EGRP, involves small, proprietary plastic tubes installed in the ground, has no operating or maintenance costs, and promotes infiltration and drainage, and facilitates the movement of water.

Stormwater on Belle Isle Park is collected in a network of aging separate storm sewers leading to a combined sewer, resulting is excessive storm water being delivered to the wastewater treatment plant. McPartlin says excess stormwater is the cause of combined sewer overflows that’s a major financial liability for the city.

Stormwater directly impacts impacts economic development, and McPartlin says Parjana’s goal is to work with water utilities to reduce the volume of stormwater that needs to be treated.

Parjana is developing projects in Chicago, Milwaukee, and California, and has completed more than 150 projects across the world. The company recently installed a parking lot drainage system at Lawrence Technological University in Southfield.