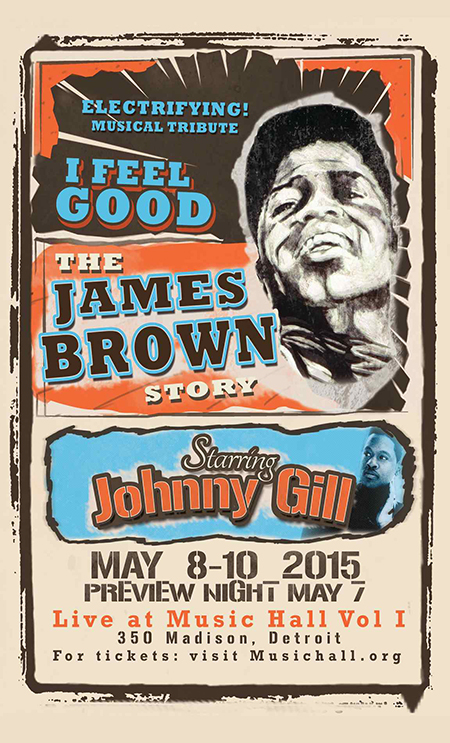 Music Hall Center for the Performing Arts and Feelin’ Good Productions, both in Detroit, have produced and will present the world premiere musical stage play, “I Feel Good — The James Brown Story Vol. 1.” The play will run from May 8-10, with a preview on May 7.

“The play comes entirely from Detroit, and it is our goal to see it travel to New York, London, and other parts of the world,” says Rick Manore, Music Hall’s director of public relations. He adds the production, which began last summer, was a longtime goal of Vince Paul, Music Hall’s president and artistic director. “He willed it to happen,” Manore says.

Brown, an American recording artist and musician, was one of the founding fathers of funk music and a major figure of 20th-century popular music and dance — and was often referred to as “The Godfather of Soul.” The play tells the story of Brown as seen through the eyes of long time backup singer and friend, Martha High, one of the artist’s confidantes who also narrates the performance.

Written and directed by Drumline’s Donald P. Roberts, Brown will be portrayed by Johnny Gill, an R&B legend and multi-Grammy nominated artist. Gill will be joined on stage with the Famous Flames, as they perform a handful of Brown’s greatest hits.

The storyline tells the Godfather Of Soul’s tumultuous life from his strained and problematic relationship with his mother, and of his humble and troubled beginnings to his rise as an international superstar. Maurissa Rose, a Detroit singer, songwriter, and actress, plays his mother, Susie Brown.

The play will take the audience from James’ early years, and his hardscrabble youth to his ascent up the music business ladder from the ’50s and ’60s R&B circuit to The T.A.M.I. Show, and then to the famed Boston Garden concert in 1968 where Brown quelled an agitated crowd after the word spread of the assassination of Martin Luther King Jr.

“We are taking a chance on producing the play, but we wanted to show our artistic commitment to Detroit and to our patrons,” Manore says. “We held the auditions a month and a half ago, and it is our hope that the production will be very well received and we can move on to producing Volume II.”

For more information about the play and tickets, which range in price from $47.50 to $75, visit events.musichall.org/show.aspx?month=5&year=2015