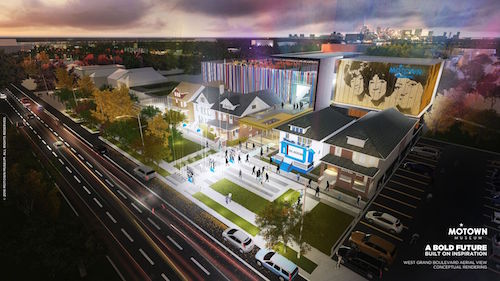 The Motown Museum in Detroit has announced plans to undergo a $50 million expansion, which will feature the addition of new interactive exhibits, a performance theater, recording studios, a larger retail area, and meeting spaces.

The new 50,000-square-foot Motown Museum will be designed and built around the current museum space and the Hitsville U.S.A. house, located at 2648 W. Grand Blvd. The exact timing of the addition opening will be announced at a later date.

“When the expanded museum opens, it will be one of Michigan’s leading cultural institutions and an even greater international tourist destination, providing economic growth and regional enrichment,” says Robin R. Terry, chairwoman and CEO of the Motown Museum. “Its imprint will be far-reaching by bringing thousands of visitors to Detroit each year along with positive national and international attention.”

Phil Freelon, managing director of Chicago-based architecture and design firm Perkins and Will, was engaged to lead the execution of the initial museum expansion concepts. He recently led the design team for the newly opened Smithsonian National Museum of African American History and Culture in Washington, D.C.

Detroit-based Hamilton Anderson Associates, a multidisciplinary design firm, is the architect of record, while Detroit-based contractor L.S. Brinker Co. will serve as the construction manager of the project. Washington D.C.-based Gallagher and Associates, a museum planning and design firm, is developing the visitor experiences and exhibition design.

Information on the timeline of construction will be available in the coming months.

The Motown Museum is a nonprofit, tax-exempt organization with a mission to preserve, protect, and present the Motown story through authentic, inspirational, and educational experiences. Founded by Berry Gordy, Motown had more than 180 No. 1 hit songs worldwide.

“It brings me real joy, and I am proud and humbled to know that the inclusive legacy of Motown, and the most talented people who are so near and dear to my heart, will have their stories told in this new museum,” Gordy says.