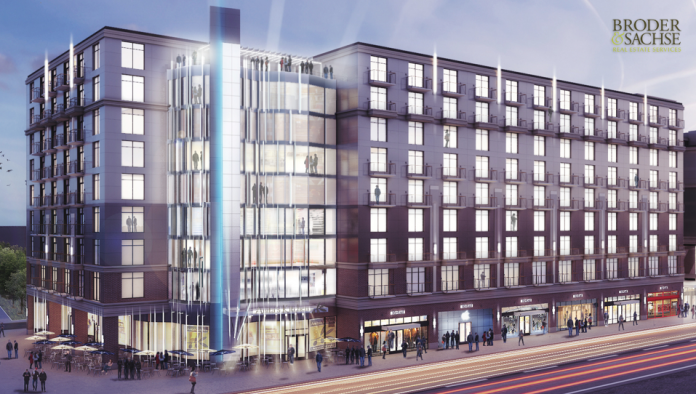 Wayne State University’s Board of Governors approved a measure today to authorize the university to enter into a memorandum of understanding and long-term lease with Broder & Sachse Real Estate Services on a mixed-used development at the northeast corner of Cass and Canfield in Detroit’s Midtown District that will offer 248 apartments, complementary retail spaces, a hotel with up to 120 rooms, and a conference center that could accommodate up to 300 people.

The nine-story project, expected to open in 2016, will be located behind the Whitney Restaurant. The development joins several neighboring residential projects, including Studio One Apartments on Woodward Avenue, north of Canfield; Union at Midtown on Cass, south of Warren; and The Auburn, at the southeast cornet of Cass and Canfield. Overall, the residential occupancy rate in Midtown is above 95 percent.

In addition, several other projects are in the works, including Forest Arms by Scott Lowell and Carolyn Howard at Second and Forest avenues, which will offer 70 apartments, a geothermal energy system, and two retail locations inside a brick and masonry structure built in 1905.

In recent years, Wayne State has added dozens of apartments and retail spaces on campus. “In addition to providing much-needed housing and hotel and conference facilities, this project will enhance the connection between our main campus and our medical campus, as well as further promote Midtown as a walkable and bikeable neighborhood,” said WSU President M. Roy Wilson. “Wayne State remains committed to being a leader and catalyst for economic growth in Detroit.”

The development will be located near the car-sharing service Zipcar and a proposed M-1 rail stop, both of which are amenities sought by young professionals. The M-1 Rail project, to run three miles on Woodward Avenue from downtown Detroit to New Center, is expected to be operational by 2017.

The university selected Broder & Sachse through a competitive RFP process in which the university received five proposals. The architect for the project is Kraemer Design Group, located in downtown Detroit.

“Broder & Sachse Real Estate is very excited about partnering with Wayne State University in developing a groundbreaking, state of the art, hip, dynamic mixed use development in Midtown Detroit,” said Todd Sachse, principal of Broder & Sachse Real Estate in downtown Birmingham. “The demand and rapid growth in Midtown and downtown Detroit makes the timing for this development optimal. We know this will be a great asset for the university and the community.”