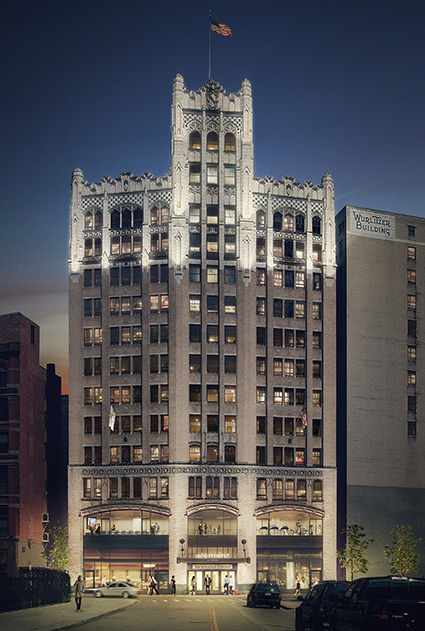 Starwood Hotels & Resorts Worldwide Inc. and two local partners will convert the historic Metropolitan Building in downtown Detroit into a 110-room Element Hotel. The new Element Detroit at the Metropolitan Building will be owned and developed by Detroit-based Metropolitan Hotel Partners, a joint venture between the Means Group and the Roxbury Group.

The Element, to be completed in July 2018, will include a top-to-bottom renovation of the interior while preserving elements of the Metropolitan Building’s original ornate lobby and mezzanine. The 14-story, 100,000 square-foot building will feature 2,000 square feet of state-of-the-art meeting space on the second floor mezzanine level, approximately 7,000 square feet of retail space on the ground floor and lower level, and an outdoor patio on the 11th floor rear rooftop.

“We look forward to introducing Element to Detroit with this exciting adaptive re-use project that will retain the historic charm of the Metropolitan Building, while turning it into a sleek and stylish destination for travelers visiting the Motor City,” says Brian McGuinness, senior vice president of Specialty Select Brands for Starwood.

The neo-gothic Metropolitan Building, located on John R, east of Woodward Avenue, was designed by the Detroit firm of Weston and Ellington and opened in 1925 as a jewelry emporium that housed diamond cutters, goldsmiths, and silver workers on the upper floors and retail on the lower levels. It has been closed for more than two decades.

“The new Element will help meet demand for high-caliber extended stay lodging in downtown Detroit, as well as address the growing demand for business and leisure travel to downtown, particularly given its close proximity to the city’s top entertainment attractions,” says David Di Rita, a partner at the Roxbury Group. “With its historic appeal, smart design, and diverse offerings, Element Detroit at the Metropolitan Building will serve an important role in the growth of the city and in our ongoing drive to preserve the City’s architectural gems.”

The Means Group, which focuses on the adaptive reuse of buildings, most recently completed the redevelopment of the Woodward Garden Development, just north of the Max M. Fisher Music Center in Midtown. The project included the complete restoration of the historic Garden Theater, originally built in 1912, into a multi-use facility.

Founded in 2005, the Roxbury Group has developed more than $125 million in total project value, with $75 million of projects in the pipeline.  Most recently, the company started construction on The Griswold, a $24 million, 80-unit apartment building that will rise five stories atop a 10-story parking and retail building in Detroit’s Capitol Park (located just east of the Westin Book Cadillac Detroit).

The Roxbury Group also is renovating the Plaza, a 74-unit apartment conversion of an historic former office building along Woodward in Midtown. In 2014, the company re-opened the historic David Whitney Building along Detroit’s Grand Circus Park, following a $94 million redevelopment into an Aloft hotel, 105 apartments, the WXYZ Bar, retail, and a future restaurant.