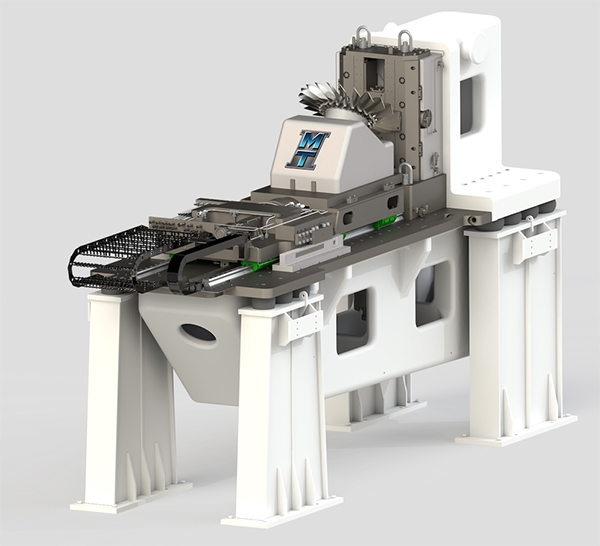 Located in Corktown, LIFT will use the welder in its light-weighting research for the automotive and aerospace sectors.

The LF35-75, which weighs 122,000 pounds — as much as a Boeing 737 — has the largest tooling envelop of any linear friction welder in the world, allowing for the production of the largest full-scale parts available.

It will bring the same linear friction welding technology used in aerospace to achieve light-weighting blisks and integrally bladed rotors to aircraft engines and the automotive industry.

“This is the only machine of its kind in the world, and we are extremely excited about the possibilities this machine brings moving forward,” says Dan Adams, president and CEO of MTI.  “Our North American customers in the aerospace, automotive, defense, rail, and mining industries have been looking for a machine that is capable of full-scale parts. Previously, these customers would have to travel all the way to Europe. But now, they have access to this technology right here in Detroit.”

MTI and LIFT will have shared capacities of the machine.

“Deploying a machine such as this linear friction welder will increase our light-weighting research and development exponentially,” says Nigel Francis, CEO and executive director of LIFT. “We are thrilled to have MTI as a partner and thankful for their willingness to develop and deliver such an impressive piece of equipment for us here in Detroit.”

MTI will run and maintain the machine at LIFT’s facility. It will also complete customer-directed work on the machine and support LIFT’s programs.

MTI specializes in friction welding technologies. LIFT is one of the founding members of Manufacturing USA, a private-public partnership designed to help develop and deploy advanced lightweight metal manufacturing technologies and implement education and training programs.