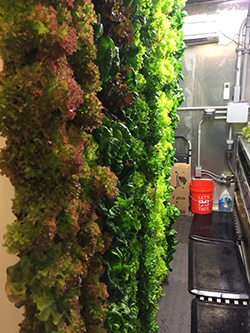 Detroit-based LaGrasso Bros. Produce Inc., one of the largest fresh food distributors to restaurants in the state, has introduced a local planting system that utilizes shipping containers to grow lettuce year round.

Tom LaGrasso III, COO of LaGrasso Bros. Produce, says there was demand from the company’s customer base for local products. The company then turned to Boston-based Freight Farms’ Leafy Green Machine, a hydroponic farming system in a shipping container, to offer lettuce year round to its customers.

“(The technology is) advanced and impactful so that first time farmers (use it they) can be growing whatever product that they’re looking for,” LaGrasso says.

LaGrasso Bros. Produce started growing a propriety blend of lettuces in September, and first harvested the crop in November. “It’s a colorful mix of nutty and spicy flavors that gives a good variety of mix for the chef to play with,” LaGrasso says.

He says the restaurant Toast in Birmingham has purchased the lettuce blend, among other restaurants in metro Detroit.

LaGrasso Bros. Produce was founded in 1914 as a pushcart operation in Detroit. The company operates a 40,000-square-foot refrigerated facility near General Motors Hamtramck Assembly Plant that includes 13 separated rooms for temperature control. The company sources from local farms such as Pirrone Farms in Capac, Iott Ranch and Orchard in Petersburg, and Kitchen Farms Inc. in Elmira.