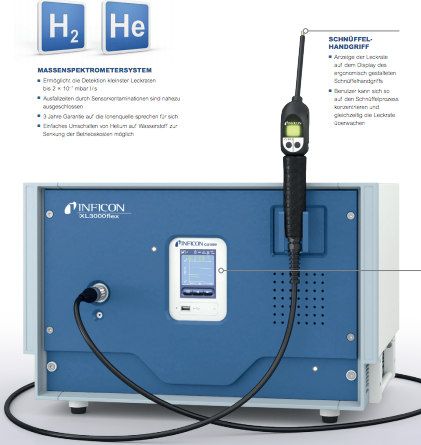 INFICON, a supplier of leak-detection equipment for the auto industry, Monday announced it has developed an industry-first leak detector suited for high-speed robotic test applications.

Using helium or forming gas (95 percent nitrogen and 5 percent hydrogen), the XL3000flex detects critical leaks affecting product quality. The XL3000flex is faster and more accurate than most systems currently in use.

The XL3000flex is capable of locating extremely small leaks in critical components such as electric-vehicle batteries and is up to 20 times faster than conventional systems.

“The auto industry serves as a benchmark for other industries, so we expect that the robotic test methodology we are developing with the INFICON XL3000flex will be adopted by other manufacturers as well, especially in the refrigeration, air-conditioning, construction-equipment, and aerospace industries,” says Parker.

The system is reliable under production conditions and is also suitable for harsh manufacturing environments. It detects leaks even with elevated test-gas levels in the background.

It has selectable flow rates of 300 or 3,000 standard cubic centimeters per minute and is ideal for robotic applications where high gas flow is critical for reliable testing. However, the XL3000flex is also designed for manual testing.

INFICON has equipped the system with redundant alarms to alert the operator during manual leak detection testing. If the XL3000flex detects a leak that exceeds a defined limit, it triggers an audio alarm in the base unit as well as in the sniffer handle.

LED lights also flash on the sniffer tip, a display on the sniffer handle changes from green to red, and the handle vibrates. The system offers three distinct alarm tones.

In dynamic robotic testing, a robotic arm moves the sniffer tip over the test part.

The XL3000flex uses fieldbus interfaces for easy integration into industrial applications such as statistical process control and other quality systems.