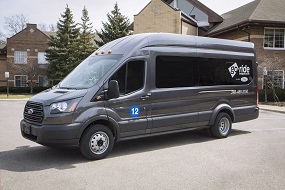 Detroit’s Henry Ford Health System has teamed up with Dearborn’s Ford Smart Mobility and Detroit’s Gleaners Community Food Bank to combat social barriers facing underserved patients in metro Detroit while gathering insight on the effects of these obstacles on health.

The barriers include lack of transportation, food insecurity, unemployment, and housing instability, all of which can affect a person’s health. The two-phase, six-month pilot will evaluate the effectiveness of providing transportation and food delivery to chronically ill patients and study whether these services will help reduce their readmissions to Henry Ford Hospital. About 50-70 patients with chronic illnesses who live within a 25-mile radius of the hospital will be involved in the pilot.

“With the health-care landscape moving to a value-based model from a volume-based one, we as an industry need to focus even more on what we can do better to address the social barriers facing our patients,” says Kimberlydawn Wisdom, a senior vice president at Henry Ford. “Shifting the focus from sickness to well-being and being able to connect and coordinate community resources will result in better health outcomes for many patients.”

In phase one, patients will be transported to and from appointments through Ford’s GoRide non-emergency medical transportation service. In phase two, GoRide will provide the patients with food from Gleaners.

A 2006 study estimated about 3.6 million people miss their medical appointments due to transportation issues. This is associated with worsening symptoms and increased need for emergency care and hospitalization, which account for an estimated $150 billion in costs each year in the U.S. In 2017, 28 percent of appointments were canceled across Henry Ford due to transportation issues.

A 2017 study by the Centers of Disease Control and Prevention reported food insecurity was associated with a higher likelihood of patients with chronic kidney disease developing kidney failure.

“This pilot (program) is important because it’s an opportunity to change the culture of health in the communities we serve,” says Michele Richards, director of patient care management and assistance, as well as leader of the pilot. “This is more than moving patients from point A to point B. It’s about addressing the social barriers to health.”

The pilot is being funded through Henry Ford’s Tom Groth Medical Needs Fund, which provides assistance to patients discharged from Henry Ford Hospital who do not have the means to pay for prescription medications, transportation, medical supplies, and other health resources.