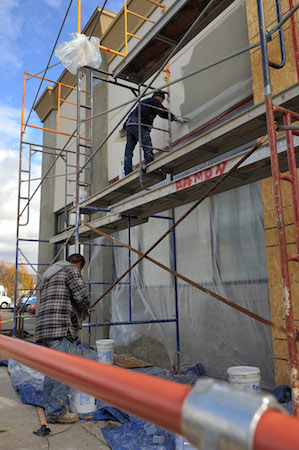 Family Fair Foods in Lafayette Park in Detroit is among 16 area grocery stores planning to make improvements to its storefront after receiving matching grants from the Detroit Economic Growth Corp.

“Several years ago, we made significant improvements inside the store, but the outside still had the hard look of concrete slabs and high security that was common 30 or 40 years ago,” says Suhel Kizi, part owner of Family Fair Foods at 700 Chene St. “The $200,000 renovation to the entrance will create an open, welcoming appearance that our customers expect and deserve.”

The Green Grocer Project, which assists Detroit grocers in addressing operational and store development, required a one-to-one match for every grant dollar provided. However, the average contribution by the grocers has averaged more than nine-to-one, says Mimi Pledl, program manager for the Green Grocer Project.

While the program will contribute $500,000 towards the renovation projects, including the grocer’s contributions, about $5.3 million is expected to be spent on the façade improvements overall.

“We had remarkable participation from Detroit’s independent grocers who are investing far more in these facelifts than we anticipated,” Pledl says.

Upgrades will include updating exterior materials; seasonal landscaping; installation of signage and awnings, window displays, and improved lighting; and repaving of parking lots.

Other stores that have signed contracts include: