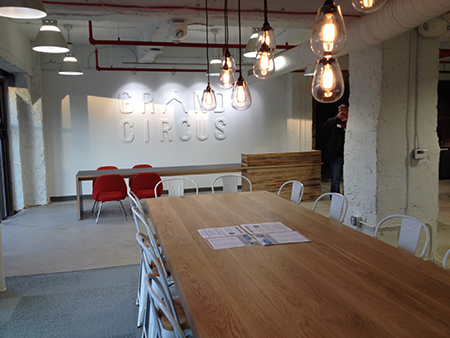 When looking for a center for their U.S. operations, global software company e-Zest Solutions Inc. had three options: Silicon Valley, Washington, D.C., or Detroit. They picked Detroit and have set up offices at Grand Circus in the Broderick Tower, a business incubation, training, and co-working lab.

“There’s a turnaround happening here, and we wanted to be on the ground floor of that,” says Shail Arora, president and head of the company’s U.S. operations.

“Out of the other two cities, San Francisco was a real consideration for us,” Arora says. “But we found there’s less competition in Detroit, (whereas) there are many companies in San Francisco competing for the same business. Also, the cost to do business is a lot cheaper here, and then there’s the whole story behind Detroit that we like.”

With more than 350 employees in Europe and India, e-Zest specializes in technologies including cloud, mobility, analytics, and user experience. The Detroit hub opened last month, where the open workspace at Grand Circus has allowed them to interact and network with other tenants who do everything from video to photography, Arora says.

“It’s a really interesting group of companies here,” he says. “We’ve talked about working on clients together. We have not yet had the opportunity to do so, but we really think we’ll get there.

“It’s still early on in that community, so three months or six months from now, I think you’re going to see a lot of collaboration in the space.”

Arora says that e-Zest has three Detroit clients and signed two more this week. The company plans to hire 15 people in 2014. Once they reach that number, Arora expects they will relocate within the central business district. “As companies grow out of Grand Circus, I think it’s natural for them to grow into the rest of the Madison Block. We love the area. I think we’ll follow the same model as Detroit Labs. They grew out of the Madison Building (around) the block and have their own location now (along Woodward Avenue),” he says.

Next Wednesday, Grand Circus will host Co-Work for a Day, where startups, small businesses, and entrepreneurs are invited to work, network, and collaborate. To reserve a spot, contact events@grandcircus.co.