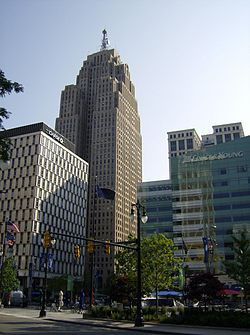 The Caucus Club, an historic downtown Detroit restaurant that closed in 2012 and known as where Barbra Streisand got her start in 1961, will be revived under new ownership with an expected re-opening in May.

George Sboukis, part-owner of Louis’ Chop House in Chesterfield Township and the owner of the Caucus Club, is leasing the space in the Penobscot Building in downtown Detroit. The Caucus Club is located across Congress Street from the London Chop House. At one time, both restaurants had the same owner.

“I foresee the restaurants continuing to complement each other,” Sboukis says. “I feel like that corridor would thrive that way. The décor and the design inside are Art Deco-inspired, and as far as menu, it’ll be complementary to what the London Chop House does.”

Under the new concept, Sboukis says he plans to offer lighter fare at lunch, such as brunch-style menu items, sandwiches, and salads, along with some fish and meat-style entrees.

“Dinner is where we’re really hoping to shine and that will be an eclectic menu with seafood, some signature dishes that will represent an international flair, and steaks and chops,” he says. “We’ll also bring tableside service to this restaurant both in salads, entrees, and desserts.”

He says the bar will take up a large portion of the 6,000-square-foot restaurant, and will feature craft cocktails along with “signature classics that harken back to the history and glory days of the Caucus Club.” The chef and bartender at the Caucus Club have yet to be named.

Sboukis says the 170-seat restaurant, which is being designed by Scott Shuptrine Interiors, a division of Art Van Furniture Inc. in Warren, will feature a dark wood floor, back bar, stage, and columns. He says the fabrics and seating will be bright and invoke the Art Deco era.