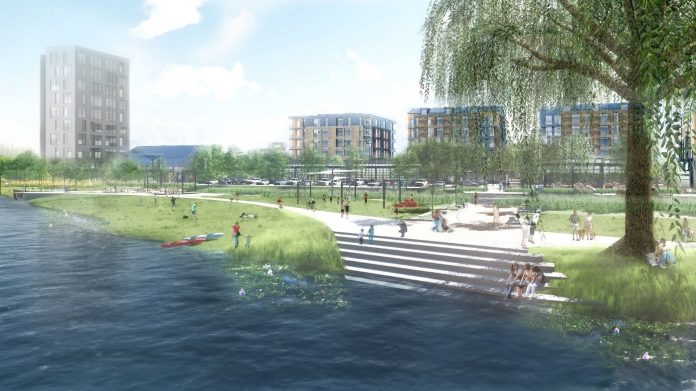 DTE Energy and The Roxbury Group, both based in Detroit, today announced they have entered into an agreement to develop an 11-acre mixed-use and public-space project on the former Michigan Consolidated Gas Co. industrial site bordering the Huron River in Ann Arbor.

The project, likely to be called Broadway Park, will be located at Broadway and Depot streets (near the Gandy Dancer restaurant) and could bring up to $75 million or more in investment to the site. The development is projected to include an 8,000-square-foot year-round event pavilion, up to 100 residential condominiums, a boutique select hotel, and up to 20,000 square feet of retail space, including space for a restaurant facing the river.

“Our development agreement with Roxbury Group is the result of DTE Energy’s commitment to developing this site in a way that highlights the natural beauty of the riverfront while preserving much of the land for the public’s enjoyment,” says Gerry Anderson, chairman and CEO of DTE. “Broadway Park is designed to be an iconic development and public space that further solidifies Ann Arbor’s reputation as one of the state’s premier communities.”

More than 80 percent of the site, or about nine acres, will be open space and green infrastructure with about 1,200 feet of restored Huron River shoreline.

“We are thrilled to be working with DTE Energy to unlock the incredible potential of this unique site,” says David Di Rita, principal of The Roxbury Group. “Given our group’s strong ties to Ann Arbor, we understand how impactful this project will be to the community, and we are pleased and honored to have assembled such an impressive team to bring Broadway Park to fruition.”

DTE and Roxbury have been collaborating on the design, along with local and national professionals, including those from SmithGroup/JJR of Ann Arbor, Detroit-based Hamilton Anderson Associates Architects, and SME Consultants of Plymouth. Also retained is the New York-based Project for Public Spaces (PPS) to assist in developing the programming and design of the public space in Broadway Park.

PPS will conduct a series of stakeholder outreach sessions to gather community input during the design and development process. After the public engagement, Roxbury hopes to obtain the necessary entitlements and permits by the end of 2018. Construction will begin immediately after.

“We are excited that, in addition to the residential and commercial development, Broadway Park will provide residents with an activated public space connecting to the surrounding parks and trails along the Huron River,” says Howard Lazarus, city administrator of Ann Arbor. “We believe the Broadway Park public space will be a significant benefit to Ann Arbor, as it will be located facing the Huron River, across from the Argo Cascade white water feature.”

The site was used as a Michigan Consolidated Gas Co. service center for more than a century and was previously a coal-gasification facility. DTE acquired the building in 2001. It later closed and demolished the remaining buildings in 2009.