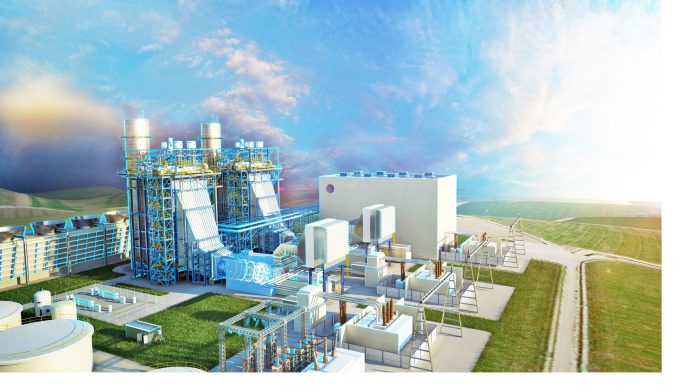 DTE Energy in Detroit Tuesday announced it has broken ground on its Blue Water Energy Center in East China Township (south of Port Huron). The $1-billion natural gas-fueled plant is expected to be the most efficient power plant in the state when it begins producing electricity for 850,000 homes starting in 2022. Construction is expected to begin in spring 2019.

“Just over a year ago, DTE first announced a broad sustainability initiative to reduce carbon emissions by more than 80 percent and do it in a way that maintains affordability and reliability for our customers,” says Gerry Anderson, chairman and CEO of DTE. “In fact, we’re already doing it. Since 2009, we have driven investments of more than $2.5 billion in renewable energy with more investments coming.

“But, as we continue to retire coal-fired power plants — all of them by 2040 — we need to complement wind farms and solar arrays with high-reliability assets. As we Michiganders know well, the wind doesn’t always blow, and the sun doesn’t always shine in our beautiful state. And that’s why we need natural gas-fueled plants like the Blue Water Energy Center. When it begins operations in 2022, it will represent our single largest step in reducing carbon emissions to date.”

The plant will be built by Kiewit Engineering Co., which will spend a minimum of $200 million on Michigan-based labor and materials. It has begun the pre-qualification process for local sub-contractors. Kiewit is based in Nebraska but has a Detroit office.

GE Power, a power generation and water technology company for utilities, independent power producers, and industrial applications, has been chosen to provide the major generation equipment. More than 500 Michigan skilled labor jobs will be created during construction, and an additional 35 full-time positions will be filled with the plant becomes operational.

“The new, cleaner natural gas power plant will create hundreds of jobs and provide additional revenue that we can put toward improving our roads, schools, and other essential services,” says Jeff Bohm, St. Clair County Commissioner. “This $1-billion investment is a significant boost to our community and helps assure continued job growth while ensuring we can meet our state’s energy needs.”

The center was unanimously approved by the Michigan Public Service Commission earlier this year and is expected to be the most fuel-efficient power plant in Michigan. It will run on natural gas and use combined-cycle technology that captures waste heat to produce additional electricity. The plant will be 70 percent cleaner and 40 percent more efficient than the three coal-fired plants DTE plans to retire by 2023.

DTE has announced plans to double its renewable energy capacity by 2022 to 2,000 megawatts, providing enough additional electricity to power 800,000 homes, while driving investments of more than $1.7 billion in Michigan. Within the next year, DTE will begin operating the Pine River and Polaris wind parks, which will have a combined capacity of 330 megawatts and be DTE’s largest and most efficient wind parks to date.

“The Blue Water Energy Center not only represents our commitment to a cleaner energy future, but our commitment to the St. Clair community,” says Anderson. “DTE has been part of this community for 65 years, and we intend to continue to be a force for growth and prosperity here for a long time to come.”