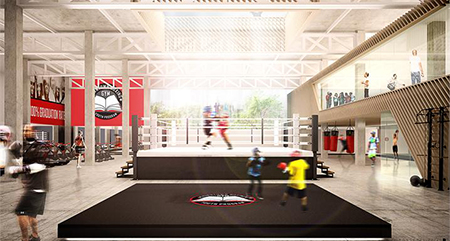 The Downtown Boxing Gym Youth Program, offering athletic training, academic support, and volunteering opportunities for youths in Detroit, will reopen in a new location on the city’s east side near Vernor and Mount Elliott on April 18.

Rossetti, a Detroit-based architectural firm, designed the 30,000 square feet space in what was once a book binding plant.

The new space will be able to accommodate up to 300 in the former gym that was housed in an auto body shop and was too small to accommodate the growing number of participants.

“We took advantage of the grit and industrial history of the building and we parlayed that into a space that kids would relate to and would be beneficial for them,” says Alice Engel, Rossetti’s interior designer for the project.

Carlo “Coach” Khali founded the Downtown Boxing Gym Youth in 2007 as a way to give children on Detroit’s east side a place to go after school. Nearly 95 percent of the children come from families that are living below the poverty line.

Rossetti is also involved with designing the redevelopment of the old Tiger Stadium as well as renovations and additions at the Daytona International Speedway.

The gym will be located at 6445 East Vernor Hwy, on the corner of East Vernor and Beaufit. The opening celebration for the gym is on April 18. The gym will host the USA Junior Olympic Boxing Championships on May 2 and 3.