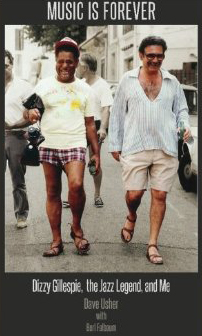 It may not be common knowledge that the late, jazz great Dizzy Gillespie once served as a director on the board of the Marine Pollution Control company in Detroit. But Dave Usher, who founded the firm in 1967, says his friendship with Gillespie went beyond their shared love for jazz.

“We were mutually interested in each other’s lives,” says Usher, who details the story of the duo’s 50-year friendship in Music Is Forever: Dizzy, the Jazz Legend, and Me, a new book, published by Red Anchor Productions.

“There were a lot of racial problems during the era we’re talking about: the ’40s, ’50s, ’60s, and ’70s,” Usher says. “But we were two guys who were able to meet and do these things in a way that we, and others in our realm, felt helped to minimize that racial divide a bit.”

His friendship with Gillespie first began in 1944 when Usher was 14 years old and lasted until the jazz trumpeter died in 1993. In the new book, he describes both their friendship and working relationship, when Usher was a jazz producer.

The book, co-written by Berl Falbaum, a former reporter for The Detroit News and administrative aide to Michigan’s lieutenant governor, also chronicles Usher’s journey in oil spill cleanups. Marine Pollution Control has assisted in cleaning up many of the world’s major oils spills, including the 1989 Exxon Valdez spill in Alaska.

The soft cover book and ebook is available at Amazon.com.