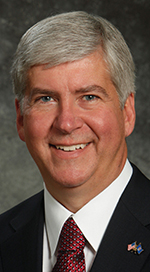 “Those attending the summit will hear from world renowned keynote speakers, take part in diverse breakout sessions, and participate in an international cyber range exercise,” says David Behen, director of the MDTB and state CIO.

The summit, scheduled for Nov. 17, will be open to the general public and is part of the state’s efforts to improve its cyber security environment, which experiences more than 500,00 cyber attacks daily. Gov. Rick Snyder will serve as the event’s opening keynote, and other presenters — currently being finalized — will be subject matter experts, says Lauren Leeds, spokeswoman for MDTB.

Leeds says attendees can expect to learn about the range of cyber threats, what actions they can take against them, what’s being done in Michigan as well as globally to deal with such threats. Career opportunities also will be highlighted.

This is the third time the state has organized the conference, which was previously called the Michigan Cyber Summit.

Registration for the event will open in August. For more information about the Michigan Cyber Initiative, click here. To read the most recent stats on Michigan’s cyber security environment, click here.