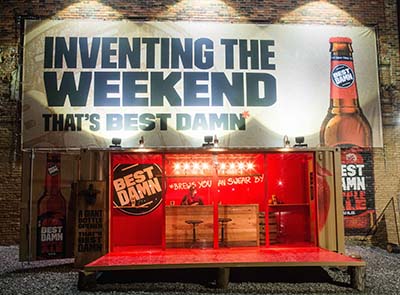 Brooklyn Outdoor, a Detroit-based outdoor advertising company, has partnered with Anheuser-Busch to launch its latest product, an apple ale, in Detroit, via a “living billboard.”

“We’re giving Detroit the opportunity to actually come into the billboard and drink the beer that we’re advertising,” says Candice Simons, owner of Brooklyn Outdoor. “We call it a living billboard because it really is.”

Simons says Anheuser-Busch is focusing on Salt Lake City and Detroit as its two target markets for the ale, called Best Damn Apple Ale. She says the outdoor space on Michigan Avenue in Detroit’s Corktown neighborhood also features live music along with products and art by local artisans.

“Everything that’s in the billboard was created by our friends here to show off what (Detroit) can do,” Simons says. “We’re really able to put a spotlight on Detroit that I don’t think was really there before (Brooklyn Outdoor) got here.”

She says the living billboard, which was outfitted from a large shipping container, will be open for the next few weekends.

Simons, a Northville native, returned from a 10-year stint in Chicago three years ago to launch Brooklyn Outdoor. The company also has sales offices in New York City and Los Angeles.

“I didn’t really realize what Detroit was going to be to me when I moved back here — it was more of just for friends and family — and I (thought), ‘What am I going to do in Detroit?’” Simons says. “I really started making time to explore downtown and everything that the city has to offer and fell in love with it unexpectedly.”

Simons, who also operates the lifestyle blog, J’Adore Detroit, works to highlight properties around the city of Detroit on a national scale by creating digital billboards and wallscapes (vinyl attached to the side of a building).