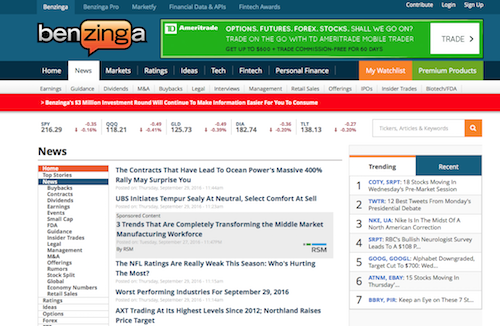 Downtown Detroit-based Benzinga, a media company that offers investors real-time market data, has closed on a $3 million investment round.

WorldQuant Ventures, an angel investment firm focused on disruptive technology companies, led the round, with other investors including Dan Gilbert, founding partner of Detroit Venture Partners and chairman of Quicken Loans Inc., both in Detroit; Stuart Robbins, former managing director of Global Equities for DLJ, and Brad Keywell and Eric Lefkofsky, founders of Lightbank.

The investments will fund an expansion of Benzinga’s content and data service infrastructure, as well as new hires at the company’s Detroit and New York offices. New hires will include salespeople, data scientists, editorial staff, and developers.

“It’s a testament to the talent of our team and the power of our mission to have such a strong group of investors believing in us,” says Jason Raznik, CEO of Benzinga. “Working with strategic investors of this caliber reinforces Benzinga’s potential to disrupt the way the markets consume information.”

Benzinga, launched in 2010, writes and distributes financial articles, and offers investment webinars, online courses on trading, and a platform where users can follow an expert who makes trades.

The company also hosts events, including the Benzinga Fintech Awards, which is the largest awards show and gala recognizing the top products, companies, and thought leaders in financial technology.