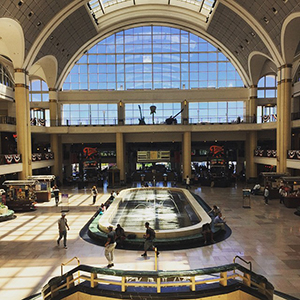 Detroit-based Bedrock Real Estate Services today announced it has acquired a three-story retail center in downtown Cleveland, with more than 100 retailers and restaurants, as well as an 11-screen movie theater. Terms of the purchase were not released.

“Over the past decade or so, we have continued to increase our investments and commitment to the long-term future of downtown Cleveland,” says Dan Gilbert, founder and chairman of Quicken Loans Inc., founding partner of Bedrock Real Estate Services, and majority owner of the Cleveland Cavaliers. “This latest acquisition is strategically connected to our other significant Cleveland investments including the Ritz-Carlton Hotel, Jack Cleveland Casino, and Quicken Loans Arena.”

“The Avenue Shops provide us with a unique opportunity to build upon the connectivity to our other downtown investments and create a one-of-a-kind urban shopping, dining, and entertainment destination,” Gilbert says.

“The Avenue of Shops acquisition is an important addition to our Cleveland family, which includes Quicken Loans, the soon to be named Jack Casino Cleveland, The Q, the Cavaliers, (American Hockey League affiliate) Monsters, and (arena football) Gladiators,” says Jim Ketai, CEO and managing partner of Bedrock Real Estate Services. “We are early in the planning stages of a unique, new design for this centrally located landmark piece of real estate. Our vision for both this exciting property and the Ritz Carlton Hotel will be announced in detail in the coming months.”

Gilbert’s Rock Gaming LLC rebranded itself and its casinos in Detroit and Ohio as Jack Entertainment LLC in February.

Gilbert acquired the Cleveland Cavaliers in 2005, renaming the facility the Quicken Loans Arena, or “The Q.” Rock Ohio Caesars acquired The Ritz-Carlton, Cleveland and an attached five-story commercial office building in 2011.