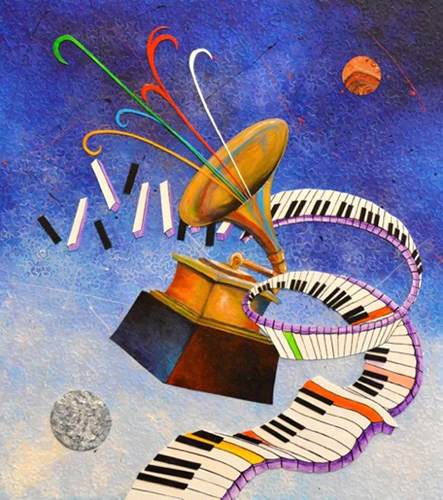 “One Nite Outta This World” by native Detroiter Marcus Glenn has been selected as the official artwork for the 56th annual Grammy Awards, scheduled for Jan. 26 at the Staples Center in Los Angeles. The mixed media piece, which depicts the event’s iconic gramophone, will be used on the cover of the program book, telecast tickets, and promotional posters.

Glenn was born in Detroit in 1968 and later attended the College for Creative Studies in Detroit. He is a former cartoonist for The Detroit News and sells art through the Park West Gallery in Southfield.

“The inspiration I find for my art is life,” says Glenn, whose works often feature human interaction with instruments as a centerpiece. “Our palettes depict the backgrounds of who we are personally.” In addition to vibrant and rich color and a refined collage technique, his palette is infused with music.

Growing up in a house filled with music from his father’s love of jazz and art, and from his mother’s love of painting, Glenn says the mixture of the two “just stuck.” Even when he was young he found himself drawn to sketching and painting instruments and musicians.

“Since music is at the heart of much of Marcus’ work, the fact that his was selected as the official artwork for the Grammys is an impeccable fit,” says Albert Scaglione, founder and CEO of Park West Gallery. “It’s an exciting opportunity for Marcus and is yet another example of the depth of talent that’s right here in Detroit.”

Other artists who have created the annual official Grammy artwork include Shepard Fairey, Charles Fazzino, Frank Gehry, and Peter Max.