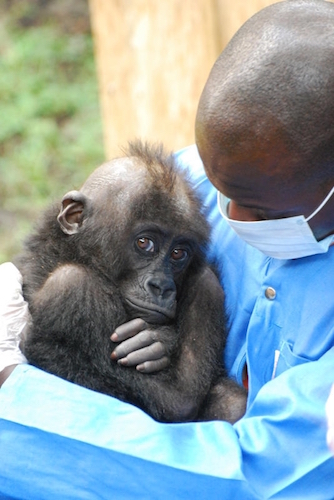 In an effort to save the endangered Grauer’s gorilla, the Detroit Zoological Society will host a presentation called “Saving Gorillas from Extinction,” this August.

In the presentation, Dr. Sonya M. Kahlenberg, executive director of the Democratic Republic of Congo-based Rehabilitation and Conservation Education Center, will provide an update on the successes and challenges faced by the center in rescuing and rehabilitating orphaned Grauer’s gorillas, also known as the eastern lowland gorilla.

“The (center) is an amazing conservation, welfare, and humane education initiative, and a wonderful collaboration of important organizations working together with a very special Congolese community to ensure that this population of extremely endangered gorillas survives,” says Ron Kagan, executive director and CEO of the Detroit Zoological Society and chairman of the Dian Fossey Gorilla Fund International, which founded the center.

The Gorilla Rehabilitation and Conservation Education Center is located on 370 acres in a remote, forested area of central Africa. It is home to 14 orphaned Grauer’s gorillas between the ages of 3 and 15 years old.

According to the World Wildlife Organization, scientists estimate that the population of Grauer’s gorillas, which are the largest of the four gorilla subspecies, has declined by more than 50 percent since the 1990s, when their population numbered 17,000.

The decline in the species’ population can be attributed to years of civil unrest in the Democratic Republic of Congo.

The presentation, to be held at 6 p.m. Aug. 14 in the Ford Education Center at the Detroit Zoo, is open to the public.

Tickets for the lecture are $25 and can be purchased online or at the door. All proceeds will be donated to the center.