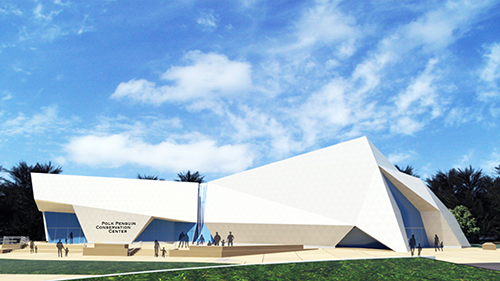 The Detroit Zoo will break ground on the $26-million Polk Penguin Conservation Center in May, zoo officials said today. The ceremony will include Detroit Zoological Society board members, donors, staff, the project’s architects, as well as the general public.

“(The event) marks the beginning of an 18-month construction period on the largest project the Detroit Zoo has ever undertaken,” says Patricia Mills Janeway, spokeswoman for the Detroit Zoological Society. She adds that the zoo will announce the general contractor for the project at that time. The date of the official groundbreaking for the penguin complex is expected to be announced soon.

The new exhibit — which will be located on 2.1 acres near the zoo’s entrance — is expected to increase the zoo’s annual attendance by at least 100,000 visitors while boosting its regional economic impact by several million dollars per year. In 2013, more than 1.3 million people visited the Detroit Zoo, which had a regional economic impact of $100.2 million last year, according to CSL International, an advisory and planning firm with offices in Dallas and Minneapolis.

Janeway attributes the expected jump in attendance to the sheer size and significance of the conservation center. “The penguin ‘deep dive’ — one of the attraction’s most dramatic features — will offer views above and below water as the penguins dive and soar through a chilled 326,000-gallon, 25-foot-deep aquatic area,” she says. “That feature, deeper and larger than the pool at our Arctic Ring of Life (the facility’s polar bear exhibit), will allow visitors to see penguins deep-water dive — something that cannot be seen anywhere else, even in nature,” she says.

Since the zoo last released details regarding the new exhibit — which will highlight the significant effect of global climate change — there have been a few updates to the plan, Janeway says. Square footage was bumped up from 24,000 to 28,000 square feet, and the deep-dive pool has increased from 310,000 to 326,000 gallons. As such, the total cost has increased from $21 million to $26 million.

Slated to open in late next year, the Polk Penguin Conservation Center will be home to 80 birds. In the June 2013 issue of Hour Detroit, Ron Kagan, executive director and CEO of the Detroit Zoological Society, explained that the Royal Oak facility will bring in 20 Gentoos — a new species of penguin for the Detroit Zoo — from other zoos. “We want to make it as comfortable as possible for the penguins. The 60 penguins we have now have individual names (like Mad Dog and Nibbles). They’re really wonderful animals, and they’ll be getting quite a new home,” he said.

Once construction is complete and the penguins have moved into the new facility, the current exhibit, called the Penguinarium, will be renovated for a bat conservation center, Janeway says.