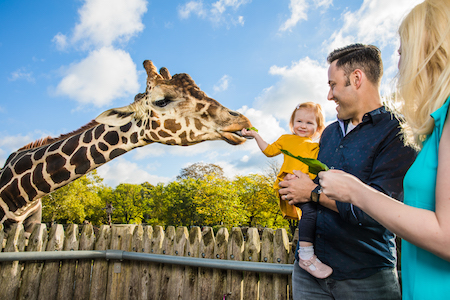 With five major renovation projects currently underway, the Detroit Zoo in Royal Oak today announced that its guest attendance total for 2017 was more than 1.5 million, the attraction’s second-highest reported total.

Three major renovation and expansion projects are slated for completion this year, including the giraffe habitat, the Devereux Tiger Forest, and the Holtzman Wildlife Foundation Red Panda Forest.

In addition, there will be a new habitat for Japanese giant salamanders at the National Amphibian Conservation Center. Construction is also in progress on a 4,343-sqaure foot Buddy’s Pizza restaurant, which will seat 155 guests and is expected to open this spring.

The all-time attendance record was set last year with nearly 1.7 million guests visiting the Zoo, following the opening of the Polk Penguin Conservation Center in April 2016.

“A spectacular Wild Lights display and continued improvements in operations and facilities are contributing factors to our robust numbers,” says Ron Kagan, Detroit Zoological Society’s (DZS) executive director and CEO. “We are grateful to the community for supporting their zoo and look forward to providing more outstanding experiences in 2018 as we celebrate our 90th year.”

DZS also operates the Bell Isle Nature Conservancy, which saw 111,928 guests in 2017, an increase from 95,363 the previous year. The Detroit Zoo currently has a regional economic impact of more than $100 million, and houses 2,000 animals and 240 species.