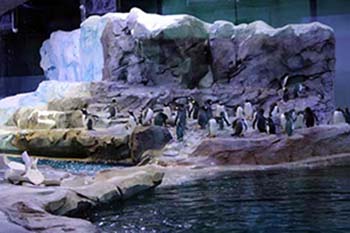 Nearly 80 penguins took center stage today for the media prior to the public opening next Monday of their new $30 million home in the 33,000-square-foot Polk Penguin Conservation Center at the Detroit Zoo.

The new facility, set on two acres in the front of the zoo near the Woodward Avenue entrance, resembles a towering iceberg with a crevasse and waterfall. While the facility was designed as an ideal home for the penguins, it offers visitors not only the chance to get an up-close experience with the birds, but an opportunity to explore and learn about the penguin’s habitat and lifestyle as well as discover a part of the world few will very see.

“This is a major leap forward (in zoo exhibits),” says Ron Kagan, executive director and CEO of Detroit Zoological Society, the nonprofit that operates the Detroit Zoo. “It’s more dynamic, provides more energy for visitors, and most of all, the penguins are happy.”

Kagan says the state-of-the-art center — home to four species: rockhopper, macaroni, king and Gentoo — is another example of a major exhibit added to the zoo in the last quarter century that provides a more natural habitat for the animals. Other similar exhibits include the Artic Ring of Life (2001) for polar bears, seals, and Artic foxes; the wolf habitat (2015); and the Great Apes of Harambee (1989).

Kagan says since their march to their new home last week, the penguins have been experiencing the new features, including lapping waves, rocks to climb, falling snow, and plenty of ice — all planned to simulate conditions found in their native habitat. The air temperature is set to a near-freezing 37 degrees Fahrenheit and the water at 40 degrees. He says the environment is intended to encourage wild behavior, from diving and porpoising to nesting and rearing young.

The sprawling facility takes visitors down a staircase that resembles the deck levels of the ship Endurance used by explorer Sir Ernest Shackleton in his legendary Antarctic expedition and epic crossing of the Drake Passage. Guests are surrounded by 4-D effects, including blasts of polar air, sea mist, and the sounds of a creaking wooden ship swaying in the giant waves. A video and sound feature called projection mapping depicts icebergs that split and send massive cascades of ice crashing into the sea.

The new penguin center also features a chilled 325,000-gallon, 25-foot-deep aquatic area where visitors can observe the penguins exploring their habitat. Two acrylic underwater tunnels provide views of the birds as they swim above, around, and below. A dynamic feature of the center will be a “deep dive,” offering views above and below water as the birds plummet, soar, and zip past zoo visitors.

In an article in DBusiness magazine last May, Kagan said the project should bump attendance by 200,000 to 300,000 visitors a year. In 2015, the Detroit Zoo recorded a record 1.4 millions visitors.

In addition, Kagan said the project already had an impact on the local economy with more than 100 design, engineering, and construction jobs created and sustained, and several full-time staff positions expected to be added once the center opens.

The center was designed by Jones & Jones from Seattle, the same firm that designed the Arctic Ring of Life and the zoo’s National Amphibian Conservation Center, and by Albert Kahn Associates in Detroit, architects for the zoo’s Ruth Roby Glancy Animal Health Complex.â€‹