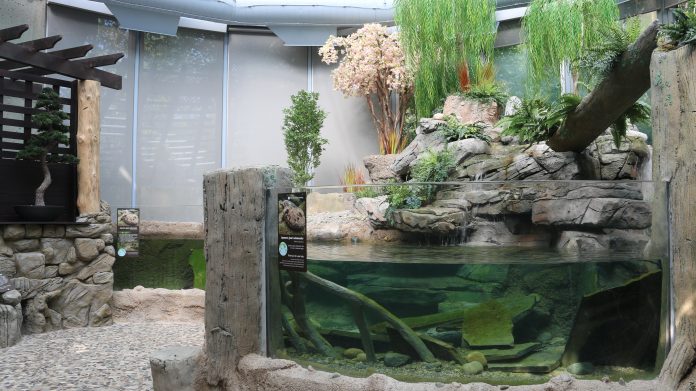 The former Rainforest Immersion Gallery has been transformed into a new habitat for the large amphibians with a home twice the size of their previous dwelling. The renovated space features naturalistic elements resembling the giant salamanders’ native landscape in Japan, including a waterfall, a flowing stream, and underwater caves.

“The goal was to make the salamanders’ home large enough to eventually accommodate all five individuals who live at the Detroit Zoo and, at the same time, create a peaceful retreat for visitors to observe the salamanders as they swim and explore their new space,” says Scott Carter, chief life sciences officer for the Detroit Zoological Society (DZS).

Learning elements allow visitors to understand the complex creatures, including a video that highlights the individual animals at the Zoo: males Bob, Dieter, and Sven, along with females Hatsue and Helga. The males can be seen in the new habitat, while the females are in the former habitat for the time being.

“Guests are able to watch the males explore their new home from now until breeding season in the spring,” Carter says. “We are waiting to introduce the females then, which is a natural time when they would encounter and interact with males.”

The Japanese giant salamander (Andrias japonicas) is the world’s second-largest salamander. They can grow to over 4 feet long, weigh up to 88 pounds, and live about 50 years. They have a broad, elongated body, a long tail, and two pairs of legs that are similar in size.

Their heavily wrinkled brown and black skin helps them blend in with the mud, stones, and plants of rivers and streams, and their flattened bodies are streamlined for swimming at the bottom of the fast-flowing water. Their eyes are small and positioned on top of their heads, causing them to rely on smell and touch for hunting.

The species is listed as Near Threatened by the International Union for Conservation of Nature as wild populations are dwindling due to habitat degradation. Once the Japanese giant salamanders at the Detroit Zoo are acclimated to their new home, the DZS will participate in a cooperative breeding program with a partner zoo in Japan, working to bolster the population of the species and eventually release zoo-born salamanders in their native habitat.

With an annual regional economic impact of more than $100 million, the Detroit Zoo in Royal Oak is one of Michigan’s largest paid family attractions, hosting more than 1.5 million visitors annually. Its 125 acres of award-winning naturalistic habitats are home to 2,000 animals representing 230 species.

The Belle Isle Nature Center sits on a 5-acre site surrounded by undisturbed forested wetlands on Belle Isle State Park in Detroit.  It provides year-round educational, recreational, and environmental conservation opportunities for the community.  For hours, prices, directions, and other information, call (248) 541-5717 or visit detroitzoo.org.