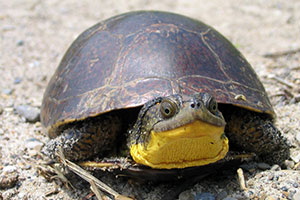 Personality studies are usually reserved for humans, but at the Detroit Zoo, the subjects are tiny turtle hatchlings.

As part of a three-year conservation effort focused on Blanding’s turtles, a Midwestern species that can live to be 50-60 years old, researchers at the zoo’s Center for Zoo Animal Welfare will focus on the hatchlings’ personalities in hopes of determining how various traits impact survivability. The hatchlings are often preyed upon, primarily by raccoons.

“While reintroduction programs are typically concerned with helping to preserve an entire species, sometimes this comes at the expense of individual animals that may not survive,” says Jeff Jundt, curator of reptiles at the Detroit Zoological Society.

“Researchers have begun to delve further into the factors that may predict success in reintroduction programs. It is believed that some behavioral factors such as locomotion, ability to acquire food, and personality may impact individual survival,” Jundt says.

The researchers hope that by investigating the role of personality in individual survival, they may improve the success rates for reintegration programs for the species.

The study is a continuation of efforts by the Detroit Zoological Society in partnership with the U.S. Fish and Wildlife Service at the Shiawassee National Wildlife Refuge and the University of Michigan-Flint to protect the nests of Blanding’s turtles, a project that began three years ago.