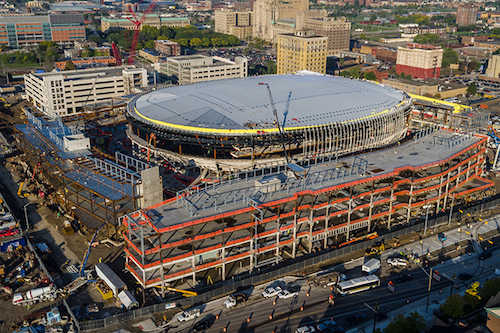 If a deal is finalized to have the Detroit Pistons begin play during the 2017-18 season at Little Caesars Arena at Woodward Avenue and Henry Street in Detroit’s Midtown district, it will be joined by a practice facility for the basketball team immediately north of the stadium, Dbusiness has learned. In a block bounded by Woodward, Sproat, Temple, and Park, the practice facility would be located at the western edge of the block.

The eastern edge of the block, fronting Woodward, will include Wayne State University’s Mike Ilitch School of Business to the north, while at the southern portion of the block along Woodward the Detroit Medical Center is looking to build a new facility for sports medicine, rehabilitation, and other health care offerings, according to real estate sources.

In turn, plans are to move the Hockeytown Café at the northwest corner of Woodward and Montcalm north in a space near or inside the new $627.5-million arena. The Hockeytown Café, which includes City Theatre, would either be demolished or incorporated into a larger development along Woodward, between Montcalm and the I-75 service drive. Behind the Hockeytown Café is a parking deck owned by Ilitch Holdings Inc., the parent company of Mike and Marian Ilitch, owners of the Detroit Red Wings.

The company also is eyeing changes to the future development of two blocks now used for surface parking in front of Comerica Park. Bounded by Woodward, Elizabeth, Witherell, and Montcalm, the area will likely be designed in the spirit of Ballpark Village located next to Busch Stadium, home to the St. Louis Cardinals.

Located on 10 acres, the first phase of Ballpark Village, which opened in March 2014, includes restaurant and entertainment offerings. Tenants include Cardinals Nation, Budweiser Brew House, Fox Sports Midwest Live, PBR St. Louis — A Cowboy Bar, Howl at the Moon, and Drunken Fish. Offering 100,000 square feet of space, the project is complemented by a small baseball diamond called Bush II Field that is used as a park and for public gatherings.

By 2019, plans call for adding a $220-million, 550,000-square foot development at Ballpark Village. The project would include a 29-story luxury residential tower, along with a new office building complemented by retail, restaurant, and entertainment space.

In the original plans for the two blocks in front of Comerica Park, the team said it would likely construct a five-story apartment complex that would offer 300 units. But those plans are being expanded considerably, sources say, to meet year-round demand for retail, restaurant, entertainment, office, and residential space generated by having four major sports teams in the area as well as the start of the Qline light rail system on Woodward in the spring.

As for the proposed MLS soccer stadium by Tom Gores, owner of the Detroit Pistons, and Dan Gilbert, founder and chairman of Quicken Loans Inc. and owner of the Cleveland Cavaliers, sources say the project team is still working to build the stadium at the unfinished Wayne County Jail site at I-375 and Gratiot Avenue. The stadium, which may be complemented by three midrise towers (hotel, office, residential), retail, restaurants, and parking, would also likely including the moving of the Frank Murphy Hall of Justice and other neighboring court facilities.

The jail and court system could be moved to the Mound Road Correctional Facility on Detroit’s east side at Davison and Mound, the former train station at Michigan Avenue and 14th Street, or the twin offices towers formerly occupied by the state of Michigan at the Lodge Freeway and Howard Street (immediately north of the Greyhound Bus Station).