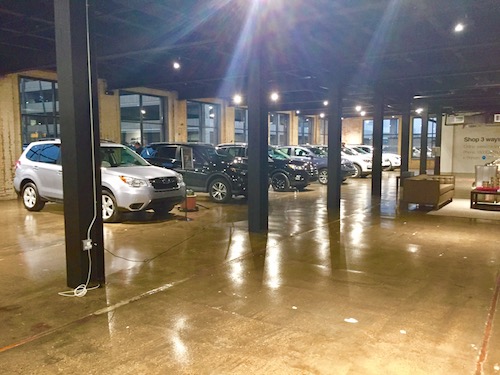 While much of the automotive industry is shifting its focus to autonomous vehicles and ridesharing programs, Detroit Trading is doubling down on an innovative way to sell cars.

Detroit Trading, located at 601 W. Fort St., is a leading automotive digital media company which uses its proprietary software to analyze data from 500,000 car shoppers per month. The company uses that data to generate leads for car dealerships.

In addition, Detroit Trading is rolling out a new concept that could usher in some big changes to the car buying experience.

The company transformed the first floor of its Fort Street office into a showroom, where it will display 10 new cars at a time, and the stock will rotate on a monthly basis. Instead of trying to show off every make and model, the Detroit Trading team will pick what it considers to be the 10 best of a particular style of auto. One month could feature luxury sedans, the next might be midsize SUVs.

“We are trying to take the hard work out of the car buying process,” says Matthew Clayson, vice president and general counsel for Detroit Trading. “There are so many different cars to choose from out there. We are just trying to pare it down to a manageable number and, in turn, make the shopping experience better.”

While Detroit Trading is showing the cars and assisting consumers, they aren’t a dealership. Rather, the company, which operates Car.Show.com and 1-800-CarShow, has partnered with several dealerships and acts as kind of a satellite showroom. This allows them to sell Chevrolets and Fords right next to Nissans and Hyundais. And, according to Clayson, the concept will take a lot of pressure off of consumers.

“We don’t have salespeople. We have product specialists,” he says. “We basically have people here who know about the cars, but aren’t incentivized to get you into a particular one. It’s very low pressure.”

If a consumer sees a car he or she wants to purchase at the Detroit Trading showroom, the product specialists will put them in contact with the proper dealership. Once a sale or lease has been consummated, the car is delivered either to Detroit or to the consumer’s home within the hour.

The idea has been a longtime in the making, and Detroit Trading will formally open the showroom next week. The company also plans to open a showroom along South Old Woodward in Birmingham, and possibly the Somerset Collection in Troy. The Los Angeles market also is being explored. Overall, the company could operate two to three showrooms in each of the 20 largest markets in the U.S.

“The retail concept has been around since 2004,” says Todd Ridley, chief creative officer of Detroit Trading. “Shopping for a car can be kind of painful and we thought we had a way to help dealers give a new experience.”

In addition to the new retail space, Detroit Trading also recently formed a partnership with Time Inc.’s automotive web property, TheDrive.com. The deal allowed the two companies to form the SHOP platform, will provide a state-of-the-art resource for car buyers to access purchasing information and data about new cars.

According to a press release, “the new SHOP platform will be integrated across TheDrive.com, putting contextually relevant vehicle specs and purchasing information alongside its enthusiast-focused coverage. As a result, The Drive’s audience will now have immediate access to more comprehensive information about the make, model, trim details and more on cars of interest, and prospective buyers can easily connect with local dealers for the best offers available both online and via a dedicated hotline.”