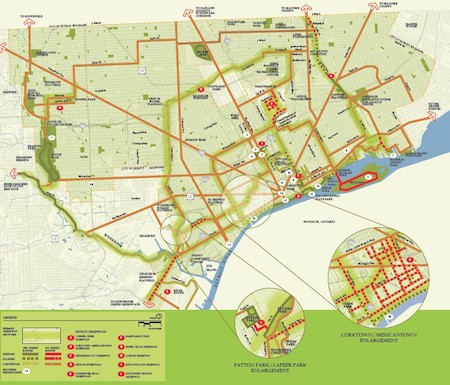 The City of Detroit and Conrail have reached an agreement in principle for the sale of Conrail railroad property for $4.3 million to complete the largest gap in the Inner Circle Greenway — an 8.3-mile stretch that once connected Henry Ford’s Model T Plant in Highland Park, and plants by Hudson and DeSoto, among others.

Overall, the 26-mile non-motorized Greenway connects the city’s neighborhoods and residents to Detroit’s assets, including parks, commercial corridors, the riverfront, and downtown. It also runs through Highland Park, Hamtramck, and Dearborn.

Making use of existing paths including the Dequindre Cut and the Detroit Riverwalk, the Greenway will upgrade existing bike lanes like those on the Southwest Detroit Greenlink and Iron Belle Trail, and build new on and off-road infrastructure to create the 26-mile loop.

The agreement will allow the city to acquire 76 acres of land to build an off-road greenway through Detroit, and receive reimbursement from the Michigan Department of Natural Resources and Department of Transportation.

“The Inner Circle Greenway is going to connect Detroiters from every corner of the city to some of our greatest resources,” says Mayor Mike Duggan. “Residents will have a safe and reliable non-motorized path of greenways and bike lanes connecting them to the river front, Eastern Market, parks across the city, and more.”

The sale is still subject to approval by the Conrail board and the Detroit City Council. Detailed design and construction preparation will begin this fall. It will feature bike lanes, pedestrian paths, seating, lighting, public safety elements, and other amenities.