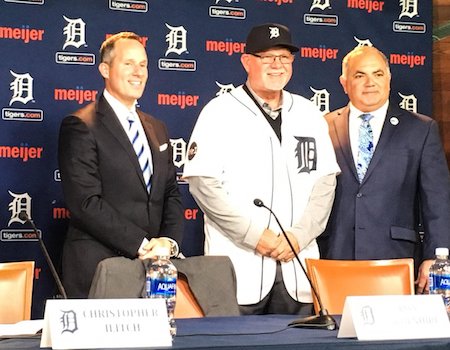 The Detroit Tigers today named Ron Gardenhire as the 36th manager in franchise history, per the terms of a three-year contract. Gardenhire has 25 years of managing and coaching experience, including 13 seasons managing the Minnesota Twins, as well as serving as bench coach for the Arizona Diamondbacks this season.

“I couldn’t be more thrilled to be named manager of the Detroit Tigers,” says Gardenhire. “After managing against the Tigers for so many years, I know first-hand what a great baseball town Detroit is and that the fans here are some of the most passionate in all of sports.

“I’m truly grateful to Christopher Ilitch and Al Avila for entrusting me to lead the team back to competing for American League Central Division titles and to our ultimate goal of winning a World Series.”

During Gardenhire’s 13-year tenure in Minnesota, Gardenhire posted a 1,068-1,039 record, and is one of 10 managers in baseball history to win 1,000 or more games with a single team. He led the Twins to six postseason appearances, including a berth in the 2002 American League Championship Series. Gardenhire was also the first manager in Major League Baseball history to lead his team to the postseason in six of his first nine seasons.

Prior to joining the Twins coaching staff in 1991, Gardenhire spent three seasons as manager for Single A Kenosha and Double A Orlando at the minor league level. He was also named the Southern League Co-Manager of the Year in 1990 by Baseball America.

Gardenhire played five seasons with the New York Mets, hitting .232 with four home runs and 49 runs batted in in 285 games. He is a native of Butzbach, West Germany and currently resides in Fort Meyers, Fla. with his wife Carol. As manager, Gardenhire will wear #15 for the Tigers.