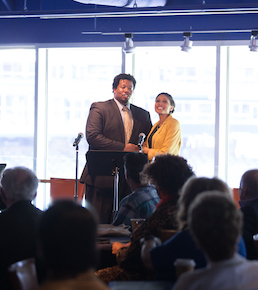 The Detroit Tigers and Michigan Opera Theatre (MOT) which has its home at the Detroit Opera House today announced “Take Me Out to the Opera,” a year-long partnership that will explore how arts and sports have improved race relations.

The partnership will include a series of community activities concluding with MOT’s May 2018 production of Daniel Sonenberg’s “The Summer King,” an opera about Negro Leagues baseball player Josh Gibson, who played for the Pittsburgh Crawfords and Homestead Grays. He visited Detroit numerous times for league play against the Detroit Stars.

“One of the opportunities available through arts and sports is an ability to bring people together, especially across racial divisions,” says Wayne S. Brown MOT CEO. “We are proud to partner with the Detroit Tigers to celebrate those athletes and artists who, like Josh Gibson, were catalysts for change in their communities.”

In addition to Take Me Out to the Opera, the Tigers’ will also celebrate their annual Negro Leagues Weekend June 30 – July 2, to honor former Negro Leagues players and the Detroit Stars.

“As the Detroit Tigers host their 23rd annual Negro Leagues Tribute Game this weekend, we are delighted to launch this partnership with the Michigan Opera Theatre,” says Ellen Hill Zeringue, vice president of marketing for the Detroit Tigers. “Baseball is rich in history, and this collaboration provides the platform to create an ongoing dialogue surrounding sports, art and race.”

Take Me Out to the Opera will partner with other organizations including the Charles H. Wright Museum of African American History, the Detroit Historical Society, Detroit Public Library, Josh Gibson Foundation, Rosedale Park Community House, and Hamtramck Stadium. Take Me Out to the Opera will pair the histories of the sports and music industries side-by-side to recognize the African Americans who led the way to integration.

Take Me Out To the Opera’s concluding presentation of “The Summer King” will take place May 12-20 at the Detroit Opera House. The opera tells the story of Gibson, considered one of the best baseball players of all time, whose life ended just before the integration of major league baseball. It includes themes of struggle, addiction, and overcoming adversity.

The opera is co-produced with the Pittsburgh Opera. It is supported in part by grants from The Andrew W. Mellon Foundation and the National Endowment for the Arts.

More information and tickets, can be found here.