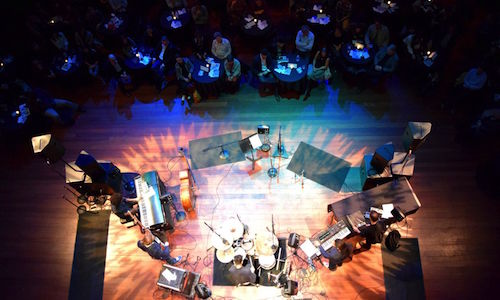 The Detroit Symphony Orchestra is launching its newest revamped performance hall, the 450-seat, Peter D. and Julie F. Cummings Cube, which is located within the Max M. and Marjorie S. Fisher Music Center in Detroit.

Formerly known as the Music Box, The Cube has been renamed in honor of Peter Cummings, chairman emeritus of the Detroit Symphony Orchestra, and his wife, Julie, whose lifetime contributions to the orchestra has surpassed $10 million.

In June, the orchestra appointed Christopher L. Harrington, of Detroit, as managing director and curator for The Cube. His inaugural season of programming for the space will increase the number of the Mix @ The Max and Om @ The Max series, as well as additional immersive musical performances throughout the year.

“During my tenure at the DSO, I’ve (had) the great fortune to collaborate with forward-thinking leaders,” Harrington says. “I believe that now is the best possible time to reimagine this unique space and its role in contributing to the cultural fabric of our city.”

The Peter D. and Julie F. Cummings Cube joins the Robert A. and Maggie Allesee Hall, home to the Detroit Public Theatre, as one of a number of venues available for outside rental within the Max M. and Marjorie S. Fisher Music Center.

The Cube, located at 3711 Woodward Ave., will be introduced at a launch party and concert at 7 p.m. tonight. A new logo and brand identity for the hall will be revealed prior to a performance by the eight-piece band Red Baraat. The event will also include food and drink vendors with a South Asian twist.