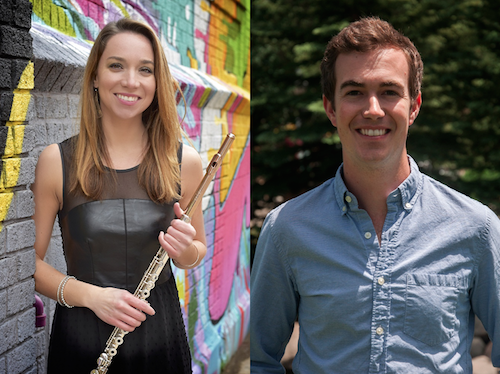 The Detroit Symphony Orchestra has hired two additional orchestra musicians from national auditions held during its 2015-16 season. Amanda Blaikie will join the orchestra as a full-time second flute and Jay Ritchie as an assistant principal timpanist and percussionist.

“(Blaikie and Ritchie) were the best of all the players that showed up for their respective auditions,” says Heather Hart Rochon, orchestra personnel manager for the Detroit Symphony Orchestra. “We hold blind auditions, meaning the committee can’t see the candidates while listening and voting on them. It’s very different than an interview where they can interact with the candidates and weigh their past history. Everything is completely based on how the candidates play.”

Blaikie, of Detroit, has been performing with the Detroit Symphony Orchestra for several years as a substitute musician. She was previously the principal flutist of the Michigan Opera Theater Orchestra at the Detroit Opera House, the Sarasota Opera in Florida, the Miami City Ballet, and the Battle Creek Symphony Orchestra.

She has preformed with New World Symphony, Boca Raton Symphonic, and the Orlando Philharmonic. She is also a flute instructor at Oakland University in Rochester Hills and runs a private flute studio in Ferndale.

Blaikie also earned a professional studies degree in orchestral performance at Manhattan School of Music under Robert Langevin. She received a bachelor of music from Principia College in Elsah, Ill., and a master of music from the University of Miami.

The Detroit Symphony Orchestra, founded in 1914, has some 85 musicians and is the fourth oldest orchestra in the U.S. The orchestra is conducted by Leonard Slatkin, its 12th music director.