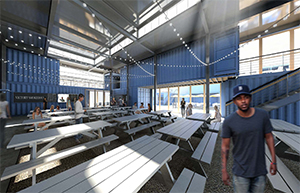 Detroit Shipyard, a $1.4 million development that includes a mix of five restaurants, an outdoor stage, two bars, and gallery space built from huge shipping containers, is scheduled to open in Detroit’s Midtown district in July.

Jonathan Hartzell, co-CEO and developer of Detroit Shipyard, says the development will be located at 474 Peterboro (near Cass), and next to the store, 8 Degrees Plato. He says he originally planned on opening Detroit Shipyard in Corktown, but after plans to buy land on Michigan Avenue failed, he looked to other neighborhoods in the city.

“We had never thought about buying land (in Midtown or downtown),” Hartzell says. “After vetting different areas, I got involved with people in the city and people at Midtown Inc. and they started helping me out and pitching me ideas. Sue Mosey (executive director of Midtown Inc.) is looking at the greater development of the neighborhood, and I think that’s good to be part of her vision.”

He says the 8,000-square-foot development will be divided into two parts, including a 4,000-square-foot, glass-enclosed food hall with communal seating that will be open year round. Each shipping container will house a different restaurant (equivalent to a food truck), along with two bars. 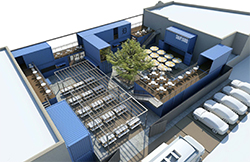 â€‹Hartzell says he’s in the process of looking for restaurants and is aiming for a mix of American, Mexican, Asian, Southern, and German cuisine.

“I’m looking for owner/operators who can transition with their food seasonally, and as trends change, they’ll pick and choose different (menu items),” he says. Detroit Shipyard expects to draw patrons from around the region for lunch, dinner, and late-night snacks. The project is a few blocks north of the new hockey arena for the Detroit Red Wings that is expected to open in late summer 2017.

Hartzell and his partners will own and operate the two bars, while the restaurants will lease the space.

The second part of the project will offer 4,000 square feet of space and will house the outdoor stage, although Hartzell says he’s working with designers now on a removable vinyl roof. He’s also working with a broker to determine what types of musical acts could come through Detroit Shipyard. The second floor of the development will be home to a pop-up gallery.