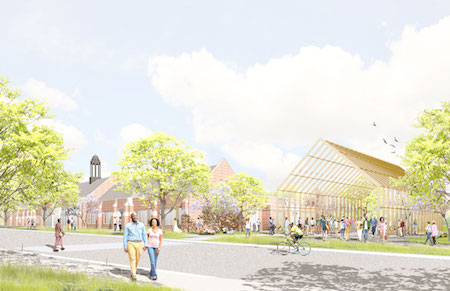 City of Detroit officials are seeking developers to remake a one third square mile section of Old Redford by rehabilitating 43 vacant houses and demolishing 23 others that are not salvageable. Similar to the recent announcement of the Ella Fitzgerald revitalization project, the Old Redford project will include landscaping and ongoing maintenance of 175 vacant lots.

“This is our strategy to drive development into the neighborhoods and move our city forward, working with community leaders and residents every step of the way,” says Mayor Mike Duggan. “There are over 650 families who have seen the highs and lows of this area. Now, we’re going to create new public spaces, clean up the vacant lots, and move new neighbors into renovated houses.”

The Old Redford Neighborhood Revitalization project will focus on the area bounded by Grand River and McNichols to the south, Pierson Street to the east, Pickford Street to the north, and Lasher to the west. The area features approximately 200 publicly-owned parcels of land, including 66 structures and 175 vacant lots.

Rather than approach each element as a standalone project, developers will be asked to submit proposals that bundle the demolition of structures that can’t be save, rehabilitation of those that can, and landscaping of vacant lots and abandoned properties into a single larger-scale initiative that lifts the whole neighborhood.

“These projects together will contribute to neighborhood stabilization, increased property values, and improved quality of life for residents,” says Arthur Jemison, Detroit’s housing director. “We’re looking to preserve existing homes and help meet the demand for inclusive affordable units in all areas of the city. The scope of the single-family rehab project creates an opportunity for smaller developers and builders to participate in the community’s revitalization.”

At least 20 percent of the renovated units, whether for rent or sale, should be affordable to households earning up to 80 percent of the area median income (AMI) in any proposal, ensuring that the neighborhood is affordable for residents.

The city is also seeking developers in a concurrent request for proposals to renovate and reactivate the former Holcomb Elementary School, which has been vacant since the school closed in 2010. Holcomb would be the first of the 77 vacant Detroit Public Schools buildings to be put back to use since the city acquired them from DPS in 2015. Since the school is located in the Old Redford area, the city is encouraging developers to submit proposals to rehabilitate the 50,000-square foot facility, built in 1925.

Developers are encouraged to submit plans for residential and/or nonresidential uses, including multi-family housing, senior housing, or even a vocational school. Proposals that include residential uses must have 20 percent of the units affordable to households earning up to 80 percent AMI.

Interested developers can find the full requests and more information here. Proposals are due Dec. 15 and a finalist(s) will be selected in early 2018, with work expected to begin later that year.