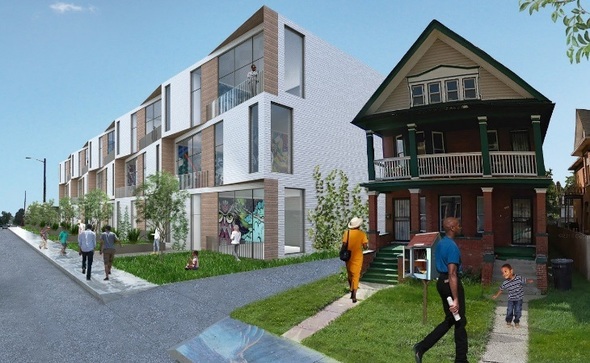 The City of Detroit is seeking proposals for renovations to 10 existing duplexes and the building of 45 additional units of new housing on vacant land in the Islandview neighborhood, city officials said Monday. Work is expected to begin next year.

The requests are part of a larger plan to create more affordable housing options in the area and to preserve and renovate dozens of vacant city – and Detroit Land Bank Authority-owned properties in about one-third of a square mile.

“One of the main things we heard from residents throughout the planning process was to preserve the homes we have and preserve affordability, and that’s what our plan is based upon,” says Donald Rencher, director of housing and revitalization. “We know we’re not going to grow as a city unless we preserve affordability and build new affordable housing. We want to do that with the community.”

The city recently completed a neighborhood framework plan for Islandview, West Village, Indian Village, and East Village. The plan was developed through an 18-month community engagement process with residents and will guide investments from Detroit’s Strategic Neighborhood Fund, established to invest in neighborhoods across the city and support housing, parks, streetscapes, and commercial corridors.

At least 20 percent of the new units must be reserved as affordable housing for residents making at 80 percent of the area median income, or $39,760 per year, or less. Preference will be given to proposals with deeper affordability levels, with units reserved for residents making as low as 50 percent of the area median income, or $24,850 each year. Funding and incentives from the city’s $250-million Affordable Housing League Fund and other affordable housing incentives will be available for the projects.

The first request seeks a developer who can renovate and occupy eight two-family duplex rehabilitation sites located on the block directly north of Kercheval between Vernor and Charlevoix. Many of the duplexes are adjacent to vacant Land Bank-owned parcels that can be assembled to provide larger side lots where appropriate.

The city expects half of all units in renovated duplexes be affordable at various income levels.

An additional request for qualifications is expected to be released next year to renovate nine more vacant duplexes in the area.

The second request seeks a developer for a new construction housing development on 13 vacant parcels between Townsend Street and Sheridan Street, as well as the rehabilitation of two adjacent vacant duplexes. Some apartment buildings in the Islandview Greater Villages area have seen waiting lists of more than 100 tenants.

The Detroit Land Bank Authority will rehabilitate 16 homes for purchase over the next 18 months through its Rehabbed and Ready Program, which offers move-in-ready, affordable homes. So far, more than 50 families in Detroit have gotten homes through the program.

More information for developers on the two projects is available here. Proposals are due Dec. 21 and will selected in early 2019.