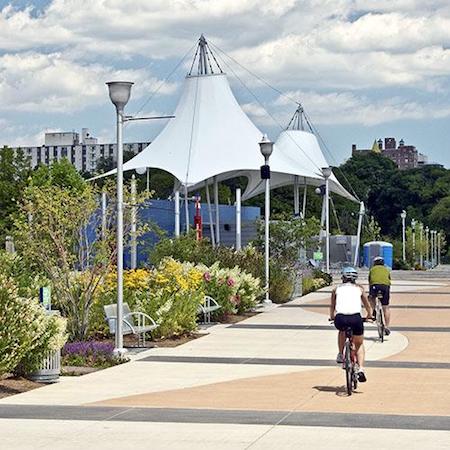 The Detroit Riverfront Conservancy, City of Detroit planning and development department, and Detroit Economic Growth Corp. recently unveiled their plans to preserve and expand Riverfront access. The plan will lead to new investment and development opportunities within the East Riverfront and was announced during a community meeting Wednesday, March 2 at the Outdoor Adventure Center in Detroit.

The three organizations have been working with architecture and urban planning firm Skidmore, Owings, and Merril on strategic framework plan for the area since spring 2016. They have collaborated on several months of stakeholder and residential engagement, including community meetings, neighborhood walks, and district tours open to the general public. New York-based HR&A Advisors provided real estate and economic consulting services for the framework plan, and landscape and design concepts were created by Michel Desvigne and Inessa Hansch, a globally-recognized team of Paris-based designers, in collaboration with SOM and other local firms.

“The riverfront belongs to all Detroiters,” says Maurice D. Cox, director of the City of Detroit planning and development department. “Thanks to the involvement of hundreds of residents, we have principles that frame an international riverfront that can be accessed and enjoyed by all.”

Highlights of the plan announced at the community meeting include creating a new Riverfront Parkland, keeping the area between Atwater Street and the Detroit River from Stroh River Place and Rivard Plaza free from development.  Three sites south of Atwater Street (previously slated for development) will become public park space, adding an additional eight acres of additional park space to the East Riverfront. The Michigan Department of Natural Resources will expand Milliken State Park and Harbor between Chene Park and the harbor, and just east of the wetlands near Rivard Plaza.

Two new “Dequindre Cut” style greenways will also be built along the East Riverfront to connect east side residents to the RiverWalk. The Joseph Campau Greenway, which runs from the Detroit River to Vernor, will receive new lighting, furnishings, paving, and landscaping. The Beltline Greenway, located between Belleview and Beaufait, will connect from Kercheval Street to the Detroit River. Together, these greenways provide connectivity to the riverfront for thousands of residents living throughout several eastside neighborhoods.

Additionally, the East Jefferson Avenue will be redesigned to be more aesthetic and bike and pedestrian friendly, to allow for a more seamless transition between the riverfront and the neighborhoods immediately to its north. These improvements are expected to begin later this year.