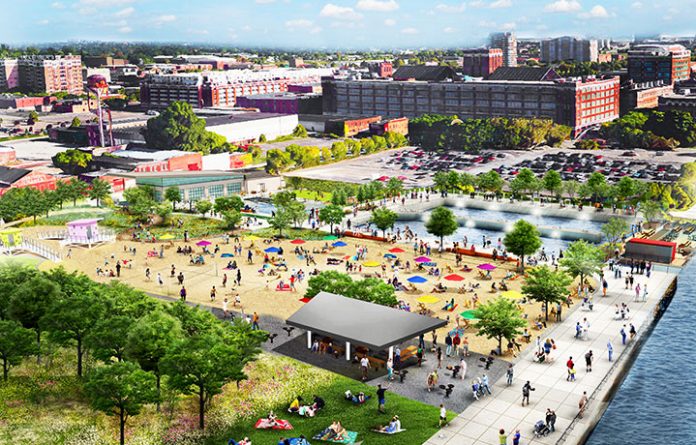 The Detroit RiverFront Conservancy Monday broke ground on Atwater Beach, which will transform a former industrial site along the East Riverfront into a beach and picnic area. The $6-million project is expected to be completed in summer 2019.

“The community has been in love with the idea of Atwater Beach from the day we first introduced the concept,” says Mark Wallace, president and CEO of the Conservancy. “People have been asking for this type of family-friendly destination for years. The great momentum that is currently happening along the East Riverfront is possible thanks to a passionate set of funding partners, including the William Davidson Foundation.”

The 3.2-acre area will include a beach area and green space, play scape, musical garden, seating, shed structure for shelter and events, and a barge for food and beverages. It was previously used as a buoy storage site and by cement companies.

The William Davidson Foundation is the lead funder of the project.

“We’re delighted to work with funding partners who share our commitment to Detroit and the riverfront,” says Darin McKeever, president and CEO of the foundation. “We’re passionate about the idea of creating and enhancing welcoming, world-class destinations that inspire visitors and enrich the quality of life for Detroit’s current and future residents.”

Other funders include the John S. and James L. Knight Foundation, which selected the project as one of its 2017 Knight Cities Challenge winners, and the Mona and Richard Alonzo Fund. The conservancy also received a grant from Gannett/USA Today Network as part of its A Community Thrives initiative, which support programs that positively impact local communities.

“Our support for Detroit’s riverfront began in 2014,” says McKeever. “We believe the riverfront is distinctive in its ability to bring people together from diverse neighborhoods and walks of life and create an enjoyable, shared experience. We’re also particularly pleased with the Detroit RiverFront Conservancy’s leadership, which engages community members in its visioning and planning of projects. As a proud partner of the Detroit RiverFront Conservancy since 2014, I encourage others to join us in supporting their ongoing efforts.”

Since 2003, the conservancy has worked to turn the riverfront into an inclusive and accessible 5½-mile public amenity that facilitates economic development and preserves the heritage of the area.