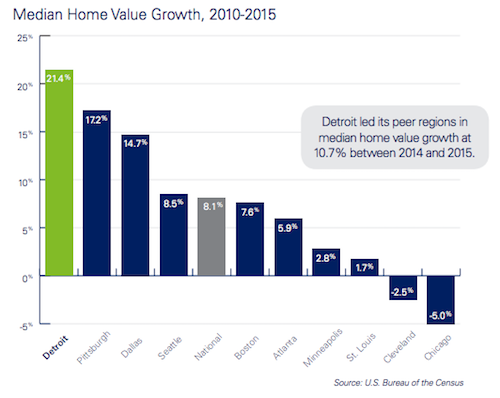 “Our region has made significant, undeniable strides that can and should encourage confidence about Southeast Michigan’s economic future,” says Rick Hampson, president of Citizens Bank, who underwrote the SOTR report. “Like any other major metropolitan area, we continue to face challenges.  But there are many, many signs indicating that we are headed in a good direction and it is important that we keep that momentum going.”

Hampson also called Detroit a “center of innovation,” citing Detroit Metropolitan Airport, patents related to the automotive industry, and a transition to a knowledge-based and technology-based economy as reasons for economic growth across the 11-county region.

According to data released in the SOTR, the Detroit region has recorded per capita growth of 13.6 percent since 2010, outpacing the national growth rate by 1.4 percentage points. The region also experienced an 11.3 percent increase in median household income, rising from $48,198 in 2010 to $53,628 in 2015, ranking seventh against peer regions. The region matched the national growth rate during the same timeframe.

The regional Detroit unemployment rate (including data from Ann Arbor, Detroit, Flint, and Monroe, peaked in July 2009 at 7 percent and has continued to decline to .8 percent, moving closer to the national rate.

The report indicates median home values are also beginning to return to pre-2009 levels, with property values in Detroit increasing by 21.4 percent between 2010 and 2015, leading peer regions in growth and outpacing the national average by 13.3 percentage points. Pittsburgh was the next closest peer region, with 17.2 percent median home value growth. The 2015 median home value in the region was $151,000 compared to $158,000 in 2009.

The Detroit area also gained more than 225,000 private sector jobs since 2010, surpassing Boston, Minneapolis, and Seattle in the number of jobs created. The region has outpaced the national growth rate in this category by 3.6 percentage points. The life science, healthcare, and information technology fields continued to draw the most capital deployment in Michigan in 2015.

Detroit also continues to lead its peers in growth regarding science, technology, engineering, and math-related jobs, with those occupations increasing more than 18 percent since 2010, and nearly 44,000 STEM jobs added into the local economy in the past five years. As of 2015, nearly 300,000 workers in the Detroit region are employed in the STEM field.

Detroit also ranked 30th in the new Kauffman Index, which measures the rate of new entrepreneurs and startup density. The region ranked sixth among its peers regarding startup density, which was 74.8 points in 2016. The University of Michigan specifically ranked as the seventh most innovative university in Reuters’ Top 100 Innovative Universities for the past year.

A full copy of the SOTR report can be reviewed here.