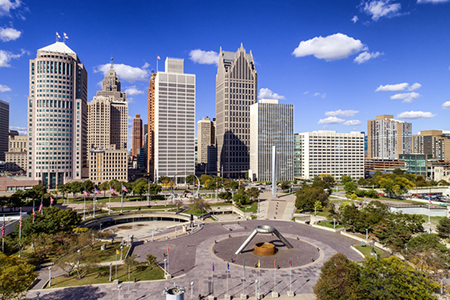 The Detroit region’s economy continued to improve during the past year in just about every measurable category, according to officials from the Detroit Regional Chamber at its annual Economic and Automotive Outlook today at Ford Field.

“The region’s progress over the past year is prevalent throughout the report, having outpaced the national average in many key areas including real gross domestic product and per capita income,” says Sandy K. Baruah, president and CEO of the Detroit Regional Chamber. “Last year alone, per capita income rose by 4.3 percent in the region.”

For the first time since the recession, office vacancy rate in the region (9.5 percent) fell below the national vacancy rate (10 percent).

“For the second year in a row, foreign direct investment in the region was more than $2 billion,” says Baruah. “With a robust and innovative automotive and technology ecosystem, southeast Michigan continues to prove that its leading industries can evolve and thrive. But this report not only highlights where the region is performing well, it also showcases areas for continued improvement.”

One of those areas is the poverty rate, which is at 34 percent, even after five years of improvement. Educational attainment also is an area in which the region continues to lag behind despite a 1.2 percent increase compared to a year ago. That increase, however, was the largest year-over-year gain since the report’s inception, and the area’s population with an associate’s degree or higher grew by 3.8 percent compared to last year.

“While progress is being made, we cannot take our eye off the prize,” says Baruah. “We need to ensure the region’s citizens have access to education and jobs, and are healthy to compete in a 21st century economy. This is a top priority of the Chamber Foundation’s economic development strategy, which is committed to making meaningful progress to address the region’s challenges.

“Detroit has recovered, and the region’s future looks bright,” he continues. “Through regional collaboration and continued support from civic, business, and government leadership, the city, region, and state will continue to thrive.”