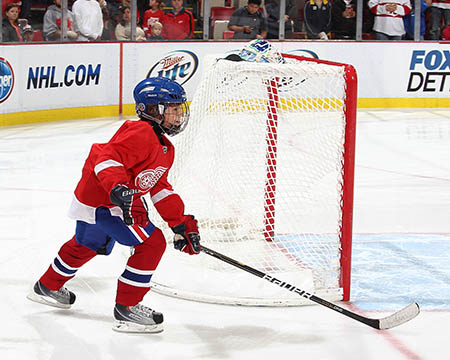 The Detroit Red Wings are reaching out to their youngest fan base with the upcoming launch of Little Wings, a new youth hockey initiative designed to teach children to play hockey and develop a life-long passion for the game.

“By providing affordable equipment and ice time, we’re hoping to introduce a new generation to our great sport and instill in them a love for the game of hockey and the Detroit Red Wings,” says Tom Wilson, CEO and president of Olympia Entertainment.

The program, which begins in January, will provide participants with four, one-hour sessions of introductory practices at one of four rinks across the metro Detroit area, as well as four hours of ice time.

“Hockey is an amazing sport, but there are hurdles to getting new kids and families involved,” said Robert Perani, co-owner of Perani’s Hockey World, which will offer the program at its rinks in Farmington Hills, Plymouth, St. Clair Shores, and Trenton. “The ‘Little Wings’ program eliminates several of those hurdles by establishing a low-cost, zero-risk opportunity for any family to try the game of hockey.”

Little Wings is intended for children who have not participated in an organized hockey program, say officials. While skating experience is encouraged, it is not required.

For more information, or to register, visit DetroitRedWings.com/LittleWings.