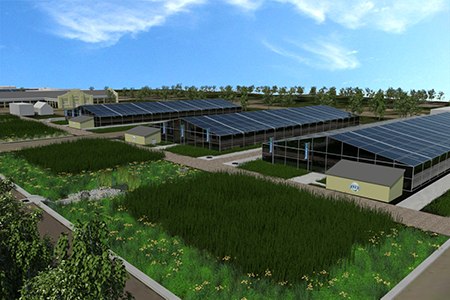 Detroit Mayor Mike Duggan and other city officials today announced a $15 million project to help the Detroit-based nonprofit RecoveryPark transform a 20-block area on Detroit’s east side into an urban farm with greenhouses to grow produce. Additionally, the nonprofit will hire more than 100 employees with the majority being Detroit residents.

“RecoveryPark isn’t just about transforming this land — it’s about transforming lives,” Duggan says. “The City of Detroit is proud to support the work Gary Wozniak (CEO of RecoveryPark) and his team are doing to put this vacant land back to productive use and to help ex-offenders and others with barriers to employment rebuild their lives.”

RecoveryPark will have more than 60 acres in Detroit, bounded by I-94 to the north, Chene Street to the east, St. Aubin Street to the west, and Forest Avenue to the south. Wozniak says he plans to hire nearly 130 employees within three years, the majority of which will be veterans, ex-offenders, and recovering addicts.

Under the project, expected to take five years to complete, RecoveryPark will replace blighted, vacant lots with dozens of greenhouses and hoop houses to grow produce. The fruits and vegetables grown in the facilities will be sold to local restaurants, retailers, and wholesalers. Current clients of the nonprofit include Selden Standard and the Republic Tavern in Detroit, Bacco Ristorante in Southfield, and The Stand Bistro in Birmingham, among others.

Under the terms of the agreement, the City of Detroit will lease the land to RecoveryPark for about $100 per acre per year. In turn, RecoveryPark must secure or demolish all vacant, blighted structures within its boundaries within the first year. Mayor Duggan says he expects the agreement to be presented to Detroit City Council within the next two weeks.