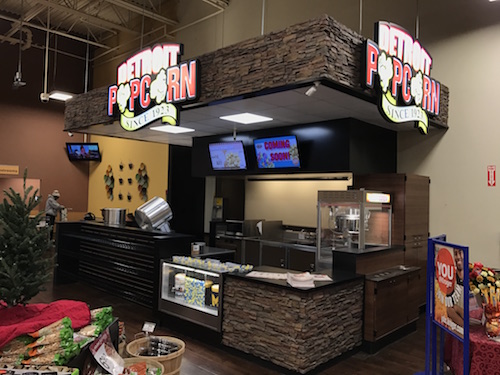 With the goal of occupying space in Kroger’s nearly 130 Michigan-based locations in the coming years, Detroit Popcorn Co., a Redford-based distributor of ready-to-eat snack foods and concession equipment, will open its first branded kiosk early next month at an Ann Arbor-based Kroger store.

Located in the Kroger store in the Traveler Village Shopping Center, 2641 Plymouth Rd., the new kiosk, which is about 15 feet by 15 feet and cost about $100,000 to build, will use flavor tumblers, 10-gallon cookers, and 48-ounce popcorn machines to offer more than 25 flavors of gourmet popcorn, such as cheddar cheese, buttery, caramel corn, and Chicago Style, which is a mix of cheddar and caramel popcorn.

“Kroger is big on partnering with Michigan made companies and we knew we would be a perfect fit,” says Evan Singer, co-owner of Detroit Popcorn Co. “The initial meeting was to pitch a gourmet popcorn stand inside Kroger stores like we have done with other local gourmet markets. However, Kroger took it a step further and offered us the opportunity to open our first branded kiosk.”

He says the new Kroger kiosks will be smaller versions of the company’s standalone store, located at 14950 Telegraph Rd., just south of Five Mile Rd., and customers will be able to buy off the shelf or call in custom orders and gifts.

The company’s initial plan is to start with the one location then expand to a minimum of 10 kiosks in Michigan-based Kroger stores by the end of next year. Detroit Popcorn Co. is also open to national expansion opportunities.

Founded in 1923, Detroit Popcorn Co. has been provides its customers with professional services, sales, rentals, leases, and placement programs. The company distributes a complete line of snack foods, and a full line of concession equipment, and supplies for popcorn, cotton candy, nachos, frozen drinks, corn dogs, candy apples, and more.