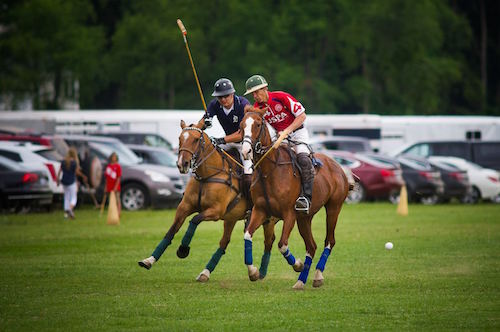 In a bid to expand membership, add a clubhouse, and offer more amenities, the Detroit Polo Club has acquired its own home fields and stables in Hartland. The property was purchased this spring when Merle Jenkins, the late founder of the Detroit Polo Club, obtained the club’s previous space, which it had parted from in 2013.

“It’s been a lot of hard work,” says Emmalyn Wheaton, club manager at the Detroit Polo Club. “The fields had been left feral for years essentially, so we’re babying it back.”

“A polo field is almost 10 acres; it’s a huge space. It can be kind of intimidating for somebody that’s just starting to play,” she says. “(The arena) is a contained area and makes learning the sport so much easier, and much more accessible to those that may not have any riding experience at all or very limited experience.”

She adds the Detroit Polo Club plans to expand its Detroit Polo School, a beginner program that teaches the game of polo, as well as its membership. In the future, the facility could add a clubhouse and other amenities.

“We don’t have a clubhouse currently and that’s something that we’re working on for 2017,” she says. “Part of our growth strategy is to have that clubhouse that has meeting space for everyone.”

Detroit Polo Club games are open to the public every Sunday at 1 p.m., and tailgating is encouraged.

The club also hosts private and corporate events and has partnered with the Juvenile Diabetes Research Foundation as its charity partner for this season, which, weather permitting, runs until October.

Starting in the 1800s, Polo has been played at Belle Isle in Detroit and at privately owned locations. The Detroit Polo Club was founded in 1962, and, at its peak, it had more than 40 members and numerous professional players.