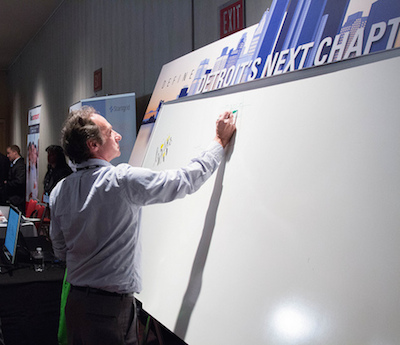 Mayor Mike Duggan will give the opening keynote at the Detroit Policy Conference later this month, a relatively new effort by the Detroit Regional Chamber designed to bring local leaders together to discuss moving the city forward.

“The big difference (with this year’s event) is where we are, compared to where we were a year ago,” says James Martinez, a spokesman for the chamber. “With a successful exit from bankruptcy, it’s a new era for the city of Detroit, and along with that comes new opportunities as well as challenges.”

This year’s conference, set for Feb. 26 at the MotorCity Casino-Hotel Soundboard in Detroit, will look at topics including developing and improving the city’s transit infrastructure; addressing the skills gap within the local workforce; growing Detroit’s startup culture; and the role the city’s neighborhoods plays in its overall revitalization.

One panel session will bring together local business leaders as well as those from New Orleans to discuss what lessons the Motor City can learn from the Crescent City’s revitalization efforts. “These are different cities, under different circumstances, but there’s a lot they can learn from each other,” says Martinez, noting the panel will likely touch on themes such as community engagement and building an entrepreneurial culture.

He adds that the panel continues a conversation that started last year when New Orleans Mayor Mitchell J. Landrieu spoke at the 2014 Mackinac Policy Conference. The chamber arranged for more than 30 local civic, community, business, and philanthropic leaders to take part in a “lessons-learned” trip to New Orleans the following October.

“We were able to go there and see what they’ve done (post Hurricane Katrina), and what they’re still doing,” Martinez says. “And that’s an important message for Detroit, which is at this critical moment in time (following the bankruptcy exit), where there’s opportunity to move this city forward, and that’s something we should be very excited about.

“But, as a lot of leaders realize, this a long-term process, and there’s a lot of work to do,” he says.

Other highlights include a keynote by Peter Kageyama, the author of For the Love of Cities: The Love Affair Between People and Their Places, and a closing panel session moderated by Nolan Finley, editorial page editor at The Detroit News, and Devin Scillian, anchor for WDIV-TV 4.

More than 800 attended the 2014 policy conference, and Martinez expects the event to meet, if not exceed, those numbers.

To register for the event, or for more information, click here. â€‹