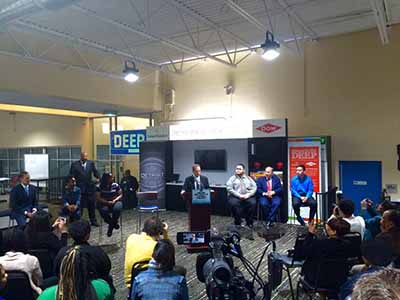 The Detroit Pistons today announced a $100,000 donation to Grow Detroit’s Young Talent, a summer jobs program for Detroit youth. The donation comes as part of a recent string of investments in Detroit programs and facilities by the Pistons.

“Jobs teach kids responsibility, commitment, and important lessons that will last a lifetime,” says Tom Gores, owner of the Pistons. “By creating these summer opportunities, we’re also providing a safe environment for kids to earn money, continue learning, and develop new skills. Supporting Detroit’s youth is a core part of our effort to inspire positive change throughout the community.”

Gores says the funds will support summer positions at Palace Sports and Entertainment and The Palace in Auburn Hills, along with jobs through partners such as Detroit PAL and SAY Detroit. The partnership will also include tours of The Palace and career information days on getting jobs in the sports and entertainment industry for program participants.

“This generous donation to Grow Detroit’s Young Talent is just the latest (by the Pistons) and will provide an opportunity for many Detroit youths to have a meaningful summer work experience,” says Detroit Mayor Mike Duggan.

Last month, Duggan announced his goal of hiring 8,000 Detroit residents between ages 14 and 24 for the six-week program in 2016. Grow Detroit’s Young Talent provided jobs for about 5,600 Detroit youth in 2015. Program participants are paid $8 an hour, while participants ages 18 and up are paid $9.50. They also receive work readiness training.

Other recent investments in Detroit programs by the Pistons include a $600,000 donation to the nonprofit SAY (Super All Year) Detroit to renovate the gymnasium and basketball court located at its play center in Detroit’s Osborn neighborhood on the city’s northeast side, along with a $300,000 donation to the Detroit Police Athletic League to create and operate a new recreational basketball league for Detroit children. Both donations were announced in January.