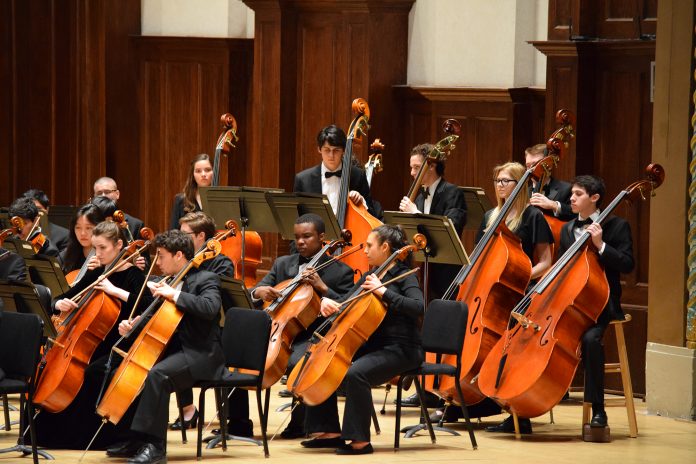 The Detroit Pistons and the Detroit Symphony Orchestra today announced a multi-year partnership aimed to enhance music and education programming for Detroit youth.

“Music is a powerful way to reach kids and inspire their creativity,” says Tom Gores, majority owner of the Detroit Pistons and chairman and CEO of Platinum Equity. “We also know exposure to the arts helps improve classroom performance. We want to make music education more accessible to children in Detroit, so they can pursue more opportunities to learn and achieve their dreams.”

Financial commitments from Gores, Arn Tellem, vice chairman of the Pistons, and the Detroit Pistons Foundation will expand the DSO’s Civic Youth Ensemble by creating a new percussion ensemble and bucket band, which is a music training group for Detroit students.

Resources will also be directed to the Sphinx Organization to support its annual Sphinx Honors Competition for young African-American and Latino musicians who compete at the DSO’s Orchestra Hall each year.

In addition, this season the DSO formed a new partnership with the Detroit Public School Community District that provided for all 4,750 DPSCD fourth-grade students and teachers to hear the DSO at Orchestra Hall over the course of the school year.

Funding by the Detroit Pistons will subsidize the entire cost of tickets for the next three years, enabling these classrooms to attend for free. Through its Blumenstein Future Audiences Fund, the DSO has provided $1 subsidized tickets for its Educational Concert Series over the past three years.

“I’m a huge supporter of the Detroit Symphony Orchestra and realize the fact that music education also positively impacts success in the classroom,” says Tellem. “During our annual Black History Month scholarship competition, we see young Detroit students express themselves in a variety of ways – through spoken word, dance, and song. This partnership with the DSO and the Sphinx Honors Competition will further engage Detroit youth year-round and will provide inspiration and a love for music.”

The DSO’s Civic Youth Ensembles have provided music instruction to young people across southeast Michigan for more than 45 years. The new percussion ensemble and bucket band will take place in a Detroit school. Further participation in intermediate and advanced Civic Youth Ensembles will be offered to those interested, along with full scholarships for the programs.

“Thanks to the generosity of the Pistons organization, we are thrilled to be able to expand our impact to realize greater music education opportunities for more Detroit students,” says Anne Parsons, president and CEO of the DSO. “Education is central to our mission, and through concerts and training programs, we seek to support students in Detroit and across our region in developing critical and analytical skills, facilitate teamwork, and encourage social success.”

The Sphinx Organization was launched in 1997 as an arts and social justice organization to promote diversity in music. The organization has served more than 25,000 Detroit students, artists, and families.

“We are grateful for a new partnership with the Pistons Foundation in support of our work in Detroit,” says Afa Dworkin, president and artistic director for the Sphinx Organization. “It is always gratifying to work together in engaging the young people who will shape the future of Detroit.”

“The DSO highly values its ongoing partnership with the Sphinx Organization, and we are thrilled that this support from the Detroit Pistons will continue to bring their important work to our audiences at Orchestra Hall and to viewers around the world,” says Parsons.