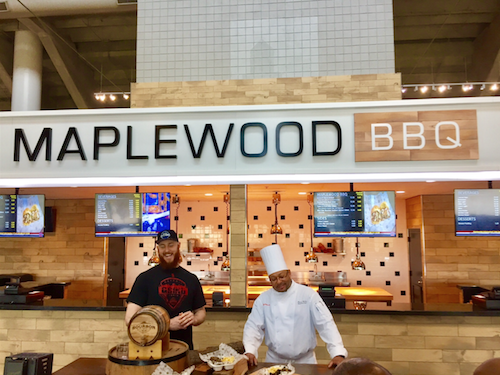 As the Detroit Pistons prepare for their home opener at the Palace of Auburn Hills against the Orlando Magic on Friday, the organization will offer several new food options this season, including House O’ Bayne Brisket, selections from Dearborn Sausage Co., and Uncle Joe’s Chicken Fingers.

The brisket is a collaboration between Detroit Pistons center and 2016 Summer Olympian Aron Baynes and Levy Restaurants, and is available for $12 along with a side of mac ‘n cheese and collared greens. The brisket, which has a black pepper and brown sugar crust, is smoked for 18 hours over Michigan cherry, apple, and hickory wood.

Available at the Maplewood Barbecue at the East Terrace, which last year underwent a $1.6-million renovation, and the Palace Grille, a portion of the proceeds from the sale of each brisket platter will be donated to the Detroit Pistons Foundation.

“I fell in love with barbecue while I was in Texas (playing for the San Antonio Spurs), so I wanted to do something when I came to Detroit,” says Baynes. “My longing for barbecue is that less is more. Executive Chef Lamar Nolden created a few different briskets, and the (black pepper and brown sugar brisket) was the one I liked the best.”

In addition, on Monday the Pistons announced new discounted food prices for season ticket holders. The $12 brisket platter, for example, will be available for $9.60 to season ticket holders. Other offerings at Maplewood Barbecue include prime rib, pork belly, and chicken sliders along with sauces (bourbon, Carolina, and sweet and spicy) created by Street Eats in Hamtramck.

The East Concourse also includes East Side Tacos and the Linkage. The latter location will offer new selections from Dearborn Sausage, including chicken jalapeno, fresh Italian, kielbasa, bratwurst, as well as an all-beef hotdog. Uncle Joe’s Chicken Fingers, which are hand-battered chicken tenders, will be available at the North Pavilion and Section 107.

Palace personnel say the East Terrace saw a 65 percent increase in sales since the renovations were completed. Maplewood Barbecue was the result of the Palace’s food truck operation, which began in summer 2015 at DTE Energy Music Theatre, Meadow Brook Music Festival, and Freedom Hill Amphitheatre.