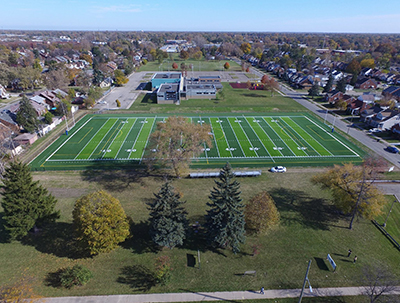 The Detroit Pistons today announced a $600,000 donation to the nonprofit SAY (Super All Year) Detroit to renovate the gymnasium and basketball court located at its play center in Detroit’s Osborn neighborhood on the city’s northeast side.

Additional funding during the six-year commitment will go to the Digital Education Enrichment Program, a digital learning center that offers tutoring programs at the SAY Detroit Play Center.

“It’s great to offer Detroit’s children a place for athletics, but it’s even better to see that this emphasis placed on academics, as well,” says Detroit Mayor Mike Duggan.

The play center, located at Lipke Park at 19320 Van Dyke St., offers athletic facilities and access to professional athletes, but only if participants (students ages 8 to 18) maintain a 3.0 grade point average and are absent fewer than three times per semester, or enroll in the center’s daily tutoring program. Pistons center Andre Drummond will be the player liaison to SAY Detroit through selected appearances.

“We need more places in Detroit where kids can learn and play in a safe environment,” says Tom Gores, owner of the Pistons. “Sports and academics go hand in hand, helping young people grow and develop life skills that they’ll need for years to come. Working with SAY Detroit to renovate the gym at Lipke Park and help fund the academic programs will make a lasting impact that benefits the whole community.”

The SAY Detroit Play Center houses a football complex along with baseball, soccer, and lacrosse fields. The center also provides programming for dance and music, including a recording studio.

“Basketball is a big part of city life, and it’s a natural fit that a team so long a part of our city’s story be part of the unique mission at the SAY Play Rec Center,” Albom says.

The Detroit Pistons most recently donated $300,000 to the Detroit Police Athletic League to create and operate a new recreational basketball league for Detroit children.

NBA Commissioner Adam Silver and Gores will share thoughts on the Detroit Pistons, social responsibility, and opportunities for businesses to be leaders in the community at a luncheon today moderated by Albom.